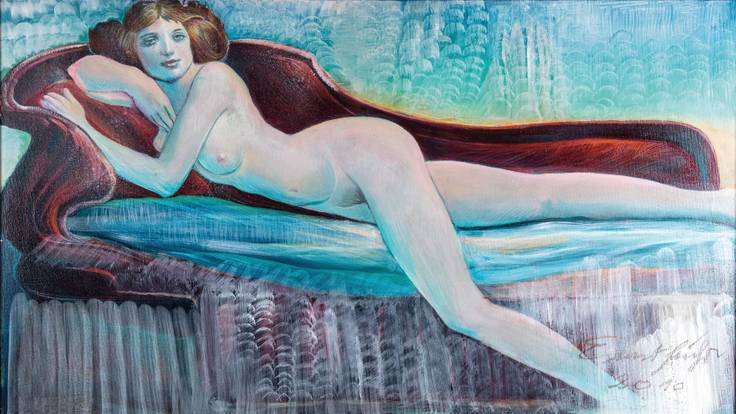 Signed and dated (lower right) 0il on canvas Painted in 2010 Provenance: Private Collection, Austria Described by his friend Salvador Dalì as "The Dalì of the Germanics", Ernst Fuchs was a co-founder of the Vienna School of Fantastic Realism in the 1940s, and an artist famed for colourful works, often with spiritual and religious themes. Born to a Jewish antiques dealer and a Catholic seamstress, as a youth Fuchs was baptised a Catholic to escape the Holocaust, when his father was forced to flee to China. The Scriptures, the Bible, and Jewish mythology were long-standing influences in Fuchs' practice, but so were Byzantine art, Italian and Renaissance painting, Surrealism, and before that, German Expressionism. In 1950 he met Dalì in Paris, and Fuchs credited their subsequent conversations with opening up his ideas about the various ways he could express himself artistically. Most known for his paintings, drawing and prints, often of female nudes, Fuchs was also a talented sculptor, composer, singer, poet, designer andarchitect, living most of his life in Vienna, though he also spent time in Paris and the USA. In 1972 he acquired and renovated the Otto Wagner Villa in Hütteldorf, which is now the Ernst Fuchs Museum. This striking nude is a good example of Fuchs’ bold style and strong sense of colour. To achieve a luminous quality to his paintings, Fuchs used a mischtechnik method of painting, combining egg tempera with oil paint and resin.
Do not miss the latest news on our initiatives and our auctions
|