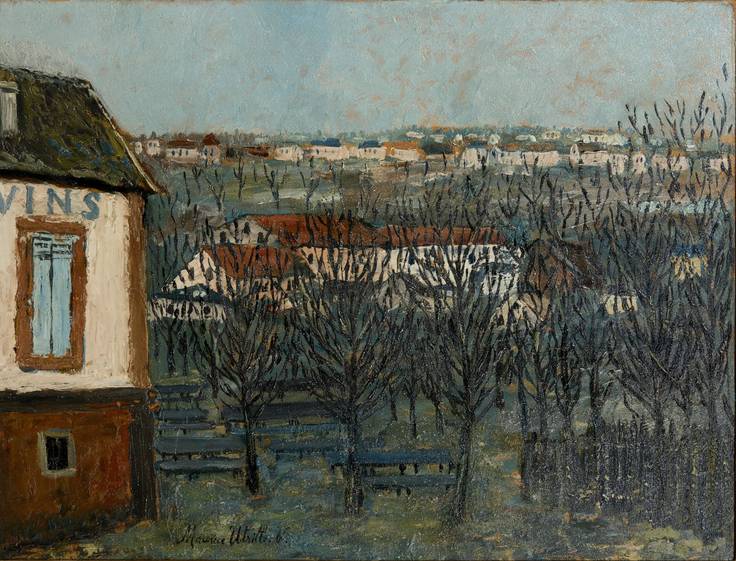 Signed 'Maurice Utrillo. V.' (lower left) Oil on canvas laid on board 45.7 x 60 cm Painted circa 1905-1908 PROVENANCE: Louis Libaude, Paris. A. Comard, Paris. Private collection, Switzerland. Bernard d'Escayrac, Long Island. Carstairs Gallery, New York. Collection of James Pearson Duffy, May 1958. Acquired by the current owner in 2012 EXHIBITED: - Japan, “Maurice Utrillo, 130e anniversaire de sa naissance” by Jean Fabris, 2013. Illustrated in the exhibition catalogue (p.39, cat. No.15)* - Paris, “Valadon, Utrillo & Utter in the rue Cortot studio: 1912-12926”, Musee de Montmartre, October 2015-March 2016. Illustrated in the exhibition catalogue (p.74, cat. No.45)** * Maurice Utrillo’s 130th birth anniversary traveling exhibition took place in: Kyoto, Takashimaya Art Gallery, 24 April-May 13; Tokyo, Takashimaya Art Gallery, Nihonbashi, 12 June-June 24; Hokkaido, Hokkaido Hakodate Museum of Art, 24 July-08 September; Kanakawa, Takashimaya Art Gallery, Yokohama, 18 September-September 30. ** The “Valadon, Utrillo & Utter in the rue Cortot studio: 1912-12926” exhibition took place in occasion of the 150th anniversary of the birth of Suzanne Valadon, mother of Maurice Utrillo. At the end of the 19th century, the ateliers of rue Cortot were important places for creation and many artists lived here, including Utrillo, with his mother and her partner, André Utter. The works on display came from the collections of the Société d’Histoire et d’Archéologie “Le Vieux Montmartre” and, more importantly, from external loans of, among others, the Centre Pompidou, the Musée d’Art Moderne de la Ville de Paris, the Musées des Beaux-Arts in Liège and Brussels and other private collections. “In point of fact, naiveté and ingeniousness are more apparent than real, however, for one has only to examine with care a canvas by Utrillo to see to what extent one is dealing with a true painter”[…] his work “imparts something magnificently luxurious to the dejected, desperate aspects of modern life» (Edmond Jaloux, quoted in A. Tabarant, Utrillo, Paris, 1926, p. 234). The son of painter and model Suzanne Valadon and an unknown father, Maurice Utrillo was one of the few Montmartre artists to be born there and grew up living between the Parisian neighbourhood and Montmagny, on the northern outskirts of the city. Sharing his mother’s studio at 12 rue Cortot, he sold his first painting in 1905, and had work shown in 1909’s Salon d’Automne. For many years he battled alcoholism and mental illness, and his family encouraged his painting in part to help him deal with his daily struggles. Painted circa 1908-1910, is a good example of Utrillo’s urban landscapes, and is both typical of his admired early period, and points towards his esteemed white period, with the colour and texture of the building on the left side of the image. The artist lived in the Butte Pinson from 1896 with his grandmother, his mother and her husband. He began painting here and created a series of paintings of Montmagny from 1905 to 1908. While his mother was the first woman to be admitted into the Société Nationale des Beaux-Arts in 1894, Utrillo, like her, had great talent but received little formal artistic training. His confident yet soft brushstrokes demonstrate a lingering influence of Impressionism, and the colours of the fence and trees in the front of the image are echoed by some of the multi-coloured rooftops one can see in the distance Utrillo is celebrated for his cityscapes, and his early paintings from 1904 onwards of Montmagny and Montmartre in particular helped establish his reputation. If a street or monument fascinated him, he could make numerous paintings of the same subject, and many of his paintings are noted for their energy and a deceptive naiveté of style. In particular, Utrillo is famous for his “white period” which spanned the years 1909-1914, and where he used a thick white impasto which he applied to the canvas with a palette knife, and sometimes mixed in plaster.