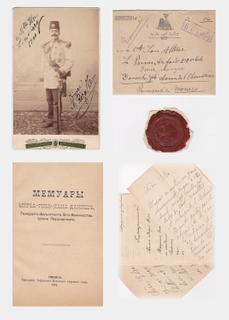 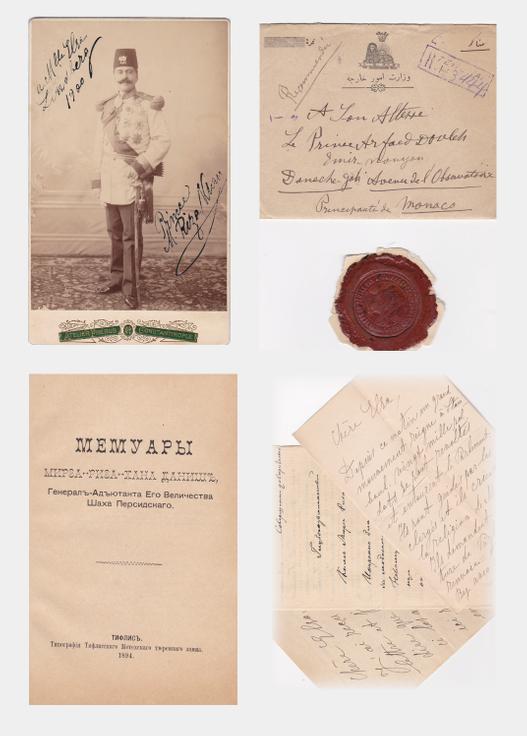 More than 30 rare documents, letters, original photographs, business cards, books and various documents of the Iranian politician’s family. Mirza Riza Khan Arfa od Dovla (1846-1937) was a prominent Iranian statesman and political figure, writer. He was a member of the High Society of the Principality of Monaco. He was Persian envoy to Russian and Ottoman Empires. His diplomatic career began in Tiflis, where he worked at the Iranian Consulate in the Caucasus. In 1899 he took an active part in the Hague Peace Conference. In 1904 and in 1933-1937 he was nominated 5 times for the Nobel Peace Prize. 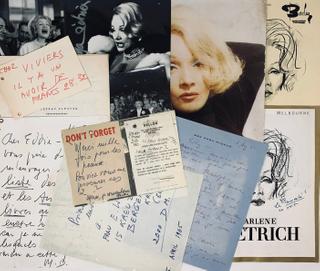 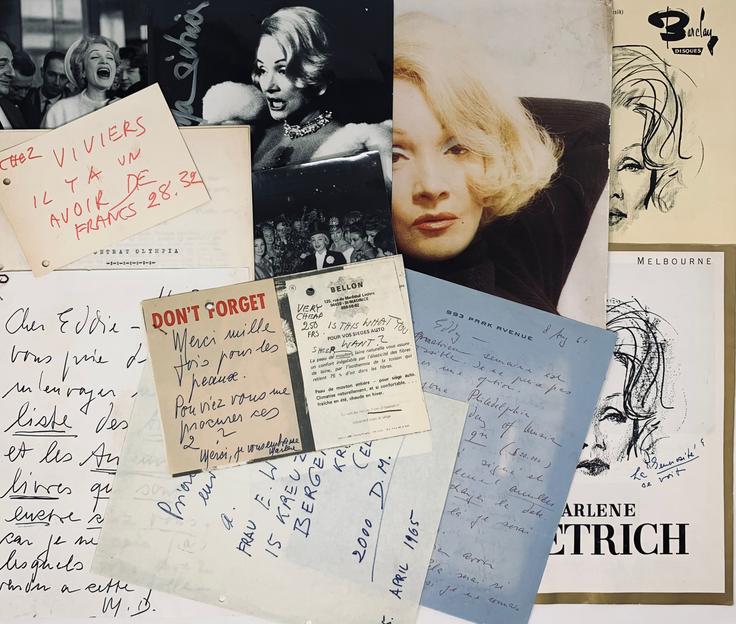 Collection including, among other pieces, an important part of the Marlene Dietrich & Eddy Marouani (her impresario) archives with more than sixty original letters / messages, most of them autographed and signed by Marlene, several photos of Marlene Dietrich, including one signed, and more than one hundred documents, originals and copies, including the original contract with the Olympia in Paris (for her singing tour which started on April 26, 1962) signed by Marlene on January 9, 1962, the catalogue, with notes by Marlene, of the auction sale «Bijoux et créations d’artistes», of November 25, 1990 in Paris of Marlene Dietrich’s stage jewellery collection. 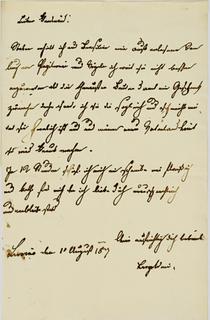 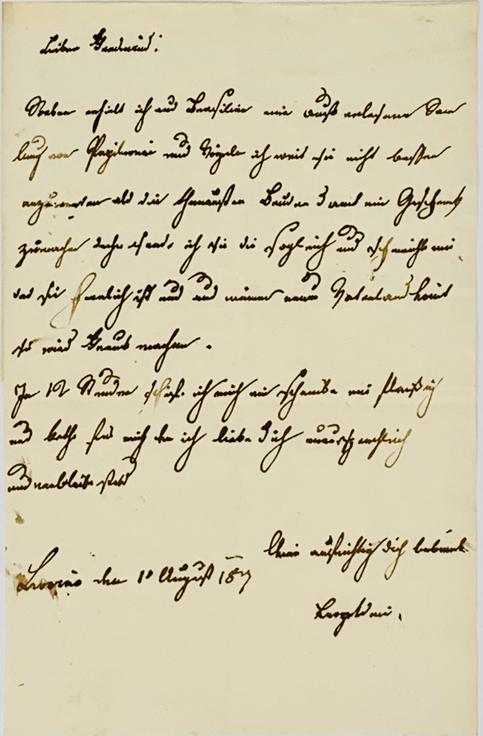 (Maria Leopoldine Josepha Caroline Franziska Ferdinanda von Habsburg-Lothringen) Livorno, 10 of August 1817. 1 p. On 2 September 1822, in absence of her husband Dom Pedro, then prince regent of Brazil, she declared the independence of Brazil from Portugal. Today, she is a highly revered idol of Brazil. Her decisive support for the cause of Brazilian independence earned her the nickname “Paladina da Independência”. “In 12 hours I will board the ship.” Immediately after setting foot in the Brazilian ship, she became a Brazilian national and relinquished her Austrian citizen. Leopoldina would never see her family, or Europe altogether, ever again. The letter was written in Livorno, only few days before the archduchess left Europe to Brazil, and just three months after marrying Dom Pedro by proxy on 13 May 1817. Boarding took place on 13 August 1817 and, after a 81-day trip, Leopoldina arrived in Rio de Janeiro where she finally met her husband. The wedding sealed the strategic alliance between Portugal and Austria. Dona Leopoldina, thanks to her competence, Austrian upbringing, and diplomatic skills, steered Brazil towards independence, promoted social progress, enlightenment, education, and immigration from Europe until her death before her thirtieth birthday. Provenance : Private archives of the Emperor Ferdinand of Austria. Private Collection 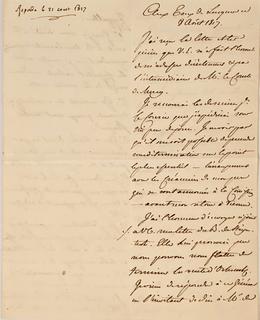 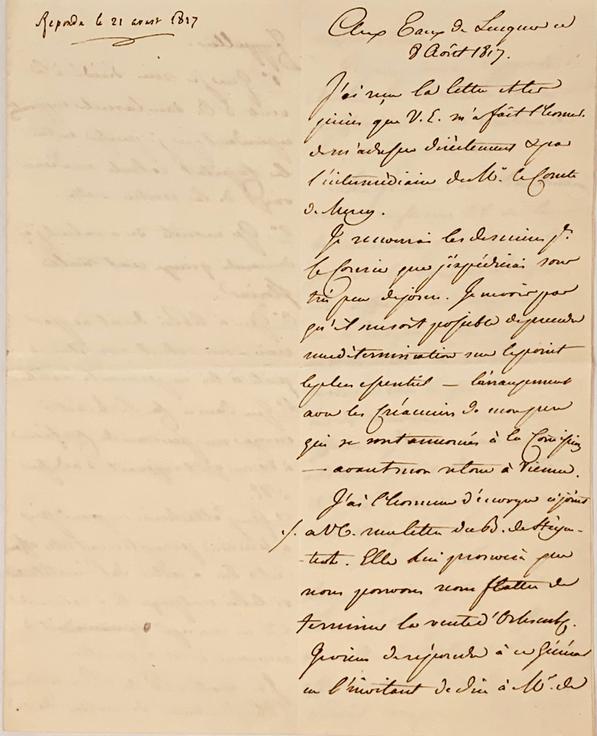 Eaux de Lucques (Italy), 8 August 1817. 4 p. folio. In French. This interesting letter to V.E.(Baron Bartenstein) concerns the sale of the semi-sovereign principality of Ochsenhausen in Wirtenberg (a popular say in those days was that the most tasteful beef meat sold in Paris came from Ochsenhausen). Ochsenhausen was at the time the property of the highly indebted father of Metternich, whose fortune was administered by the Baron. Also mentioned is the rent of the Court of Naples to the father of Metternich. The sources of Lucca were stronger than those of Carlsbad (Bohemia). Metternich says he is happy to be away from all diplomats. “Je compte me rendre après-demain à Livourne, où j’effectuerai le 12 la remise de M. l’archiduchesse.” (Archduchess Leopoldina, future Empress of Brazil). ”Son départ dépend de la faveur du vent, et ma responsabilité ne porte pas sur eux...“ (Metternich liked to use poetical language) The letter is presented in a bureaucratic two-column format. Autograph note in the first column, at the beginning of the letter: “Answered 21 August 1817”. From the archive of Baron Bartenstein, part of which is now held by the Manuscript Department of the Austrian National Library.

1p. In German. "Ich bitte gleich abzusagen. Ich komme um 11 Uhr in die Kanzlei. Rudolf Fm (Feldmarshall)." "I'll ask you to cancel right away. I will come to the office at 11 o'clock. Rudolf Fm (Field Marshal)." Rudolf Franz Karl Joseph von Habsburg-Lothringen (Rudolf Erzherzog und Kronprinz von Österreich) Third of the four children and the only son of the emperor Franz Joseph I of Austria and Elizabeth of Wittelsbach (Empress “Sissi”), heir to the Austro-Hungarian throne whose reformist and liberal ideas were stifled by his conservative father and who finally committed suicide. Archduke Rudolf found dead on 30 January 1889 with his lover Mary Vetsera in the hunting lodge at Mayerling. The details of this act are still partly unclear to this day.
Non perdere le ultime notizie sulle nostre iniziative e le nostre aste
|