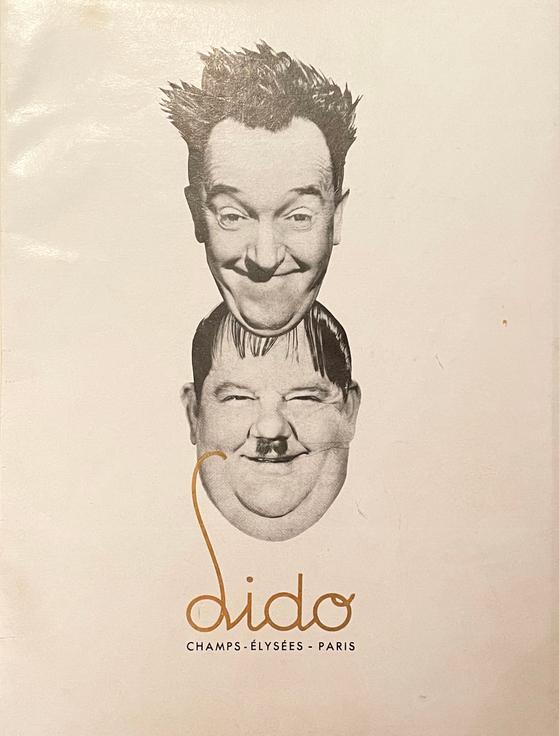 Book-album photos, bound, in which are presented the numerous photographs of their passage at the Lido, . Contract dated 1947, typed, letterhead "Fosters's Agency - London" between Pierre-Louis Guérin and "Laurel &Hardy features Prods" signed "P. Louis Guérin" and "Feature Productions". In English. . Employment contract in the name of Laurel Stanley, issued by the Ministry of Labour and Social Security in Paris. In French. . Employment contract in the name of Hardy Oliver Norwell, issued by the Ministry of Labour and Social Security in Paris. In French. . Typed letter addressed to Mr. Pierre Louis Guerin by the Office des Changes, Paris, 24 Sept 1947, giving agreement for the transfer to the United States, by both artists, of 50% of their net fee. In French. . Typed letter, on "Croix Rouge Française" letterhead, Paris, October 20, 1947, addressed to Monsieur Guerin, signed C. Rouard Watine, Head of the Propaganda Department. In French. Informing him of the organisation of a big charity event under the patronage of "Paris Presse", at the Vélodrome d'Hiver on 10 November, and asking for permission to present "the two famous artists Laurel and Hardy". . Handwritten letter, on letterhead "Ministère de l'Intérieur - Direction Générale de la Sureté Publique", Paris 28/10 1947, signed "Laurenti", special commissioner, with Ministry ink stamp. In French. . Typed letter on aeroplane paper headed "Laurel and Hardy - Feature Productions - Los Angeles California", addressed to Pierre Louis Guèrin, dated November 13, 1947, in English, handwritten signatures "Stan Laurel", "Oliver Hardy", announcing "with regret" that they wish to cancel the performances planned after November 21, 1947. They could not offer their best in this environment and did not want to appear at a disadvantage, having a worldwide reputation to preserve. They thank him for the wonderful welcome they received and for their pleasant and successful stay. "... We deeply appreciate everything you did to make our stay enjoyable and successful... It was an honour to perform at the beautiful Lido, and to receive such a wonderful welcome from all concerned. I hope you understand our view of the situation. ...." . Typed contract on "Laurel and Hardy - Feature Productions - Los Angeles California" letterhead, between Mr. Pierre Louis Guèrin and Laurel and Hardy - Feature Productions, in English, handwritten signatures "P. Louis Guérin" and "Stan Laurel", in English, concerning the performances planned at the Lido on December 5, 6 and 7, 1947. . Registered airmail envelope of the letter, with the logo representing the duo, addressed to Mr Pierre Louis Guerin, stamps and postmarks 14.11.1947. . Press clipping of Wednesday 26 March 1947, illustrated with a photo, announcing their forthcoming arrival in Paris. “THEY WILL MAKE THE PARISIANS LAUGH. Laurel and Hardy, who are currently starring in a big London music hall, will soon be in Paris. Here they are, photographed with M. Pierre Louis Guérin, general manager of the "Lido" where the two famous comedians will perform”. Stan Laurel and Oliver Hardy played together in more than one hundred films in a twenty-five year career. Their short films, up to 1935, remain unsurpassed. They also had several feature films to their credit, including "Têtes de pioche" (1938). The Lido became a cabaret in 1946, under the impetus of the brothers Joseph and Louis Clerico, who hired Pierre-Louis Guérin as director. The cabaret was transformed, luxuriously decorated and full of new ideas. Each revue was all the more successful as the attractions were of high quality. The Clerico brothers created the dinner show formula which was copied all over the world.
Non perdere le ultime notizie sulle nostre iniziative e le nostre aste
|