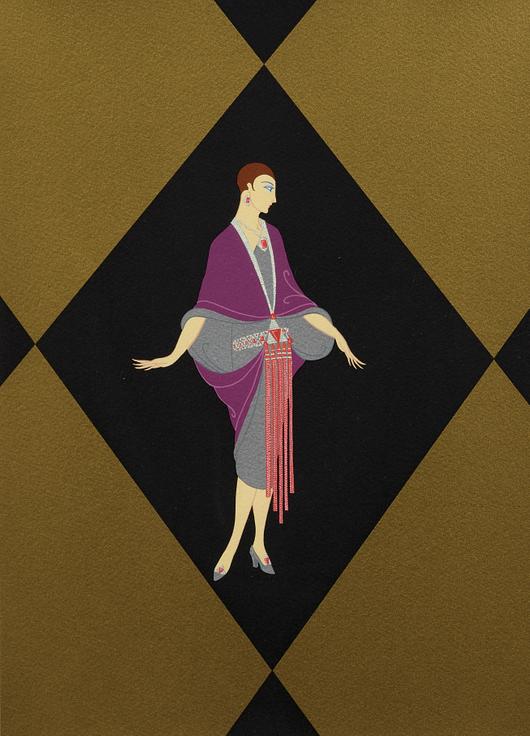 signed in pencil ‘Erté’ (lower right) and numbered ‘22/300’ (lower left) pochoir on paper image: 39.5 x 28.3 cm Literature: Yoshiaki Yanada, Erte: Leader of Art Deco his trial through the century, Tokyo, 1990 Regarded as one of the best known artists of the Art Deco movement, the Russian-born Romain de Tirtoff is one of the foremost fashion and theatrical designers of the twentieth century. He designed sets for shows in Paris, London and New York, and dance costumes for the Ballets Russes, and Hollywood actresses, such as Norma Shearer. Some of his earliest costume designs were created in 1913 for ‘Le Minaret’ featuring one of the earliest ‘belly dancer’ showgirls - Mata Hari. For 22 years he worked for Harper’s Bazaar and designed more than 240 magazine covers. The artist also wrote fashion reviews, ran social chronicles, and drew sketches of costumes, accessories, hats, shoes, jewellery and interior design. Born in St. Petersburg to the old noble family Tyrtov (his father was a lieutenant general in the navy), as a child he attended cultural gatherings and travelled to Europe with his mother, where he was introduced to the elegance typical of the high society, saturared with lavish jewellery, garnments, decorative designs and classical art. In 1900, at the age of eight, Romain Tyrtov and his family visited the Exposition Universelle in Paris, which presented a comprehensive display of the Art Nouveau style. In St. Petesburg, he studied drawing under the Russian master of realist painting Ilya Repin. In 1912, at the age of nineteen, Romain de Tirtoff moved to Paris and changed his name to Erté (‘R’ and ‘T’ in French). In Paris, Erté worked with Parisian couturier Paul Poiret, and during World War I Erte lived in a villa in Monte Carlo. Prince Nicholas Ourousoff, a distant cousin, came to live with him and was his business manager. Nicholas first suggested a relationship with Harper’s Bazar in New York.
Non perdere le ultime notizie sulle nostre iniziative e le nostre aste
|