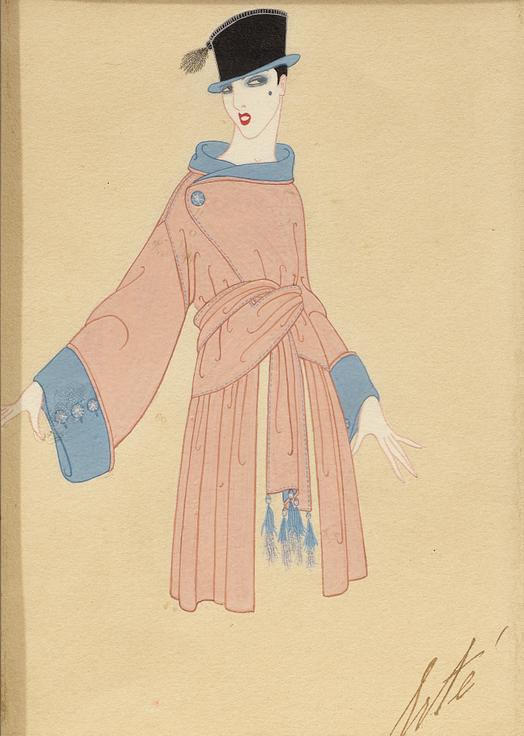 signed ‘Erté’ (lower right), Grosvenor Gallery label carrying description ‘Artist: Erte; Title: Henri Bendel: Coat; Medium: Gouache and metallic; Date: 1916; Stock No: 9622. Size: 9 1/4 x 6 1/2’ (on reverse) gouache on paper 16.8 x 11.7 cm Executed in 1916 Provenance: Grosvenor Gallery, London (gallery label affixed on the reverse of frame) Private collection, Italy Regarded as one of the best known artists of the Art Deco movement, the Russian-born Romain de Tirtoff is one of the foremost fashion and theatrical designers of the twentieth century. He designed sets for shows in Paris, London and New York, and dance costumes for the Ballets Russes, and Hollywood actresses, such as Norma Shearer. Some of his earliest costume designs were created in 1913 for ‘Le Minaret’ featuring one of the earliest ‘belly dancer’ showgirls - Mata Hari. For 22 years he worked for Harper’s Bazaar and designed more than 240 magazine covers. The artist also wrote fashion reviews, ran social chronicles, and drew sketches of costumes, accessories, hats, shoes, jewellery and interior design. Born in St. Petersburg to the old noble family Tyrtov (his father was a lieutenant general in the navy), as a child he attended cultural gatherings and travelled to Europe with his mother, where he was introduced to the elegance typical of the high society, saturared with lavish jewellery, garnments, decorative designs and classical art. In 1900, at the age of eight, Romain Tyrtov and his family visited the Exposition Universelle in Paris, which presented a comprehensive display of the Art Nouveau style. In St. Petesburg, he studied drawing under the Russian master of realist painting Ilya Repin. In 1912, at the age of nineteen, Romain de Tirtoff moved to Paris and changed his name to Erté (‘R’ and ‘T’ in French). In Paris, Erté worked with Parisian couturier Paul Poiret, and during World War I Erte lived in a villa in Monte Carlo. Prince Nicholas Ourousoff, a distant cousin, came to live with him and was his business manager. Nicholas first suggested a relationship with Harper’s Bazar in New York. Erté designed clothing for Henri Bendel’s, which ‘at the time, [...] was the epitome of chic and fashion-forward in New York’. The store was essentially founded in 1895, when Henri Bendel began making hats for the city’s elite. By 1913, Bendel was a true pioneer in the luxury fashion industry in the United States, and a fashion promoter. The first fashion show in New York was by Bendel, as well as he was the one who brought Coco Chanel to the United States. It was not only sleek forms and clear lines, but also his personal approach defined Erté’s designs: ‘Clothes are a kind of alchemy; they can transform human beings into things of beauty or ugliness... Elegance is an innate quality, it cannot be acquired. A woman of humble background can be elegant by virtue of her appearance, her carriage and movements, her way of speaking and a thousand other details. Chic is elegance within a context of what is currently fashionable; woman can be elegant even it she is dressed in yesterday’s fashions, or in a highly personal style.’ - wrote Erté in his his 1975 autobiography, Things I Remember.
Non perdere le ultime notizie sulle nostre iniziative e le nostre aste
|