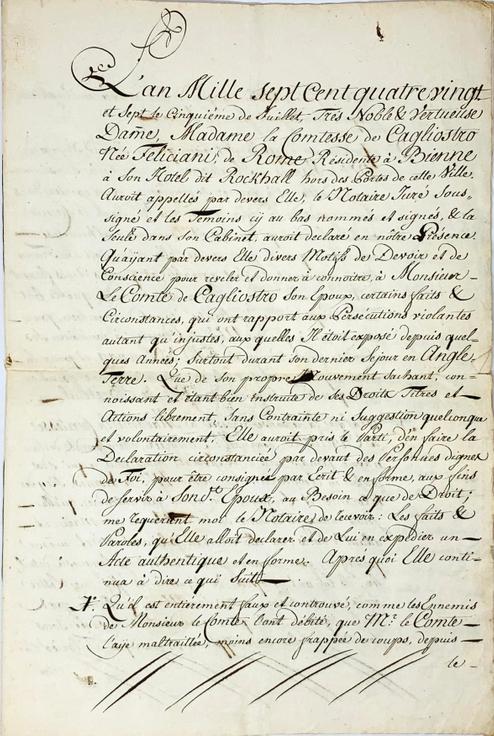 Biel 5 and 6 July 1787. 5 pages and a half in-folio, in a booklet held together by a silk thread itself fixed by 4 red wax seals, seal under paper with the arms of the city of Bienne. In French. Curious and rare document written in favour of the Count of Cagliostro by his wife, after the Affair of the Queen's Necklace and their expulsion from France. Declaration made before a notary and witnesses by Cagliostro's wife on facts and circumstances "relating to the violent and unjust persecutions to which he has been exposed for some years, especially during his last stay in England". The Countess of Cagliostro states first of all that she was never mistreated by her husband, "still less beaten". She recalls the visits made to her by M. de VISMES [Jacques Vismes de Vaglay, a French alchemist living in London] when she was in England, who sought to gain her confidence "to bring distrust into her mind against Monsieur le Comte, by assuring her that she would always be unhappy with him". It was in order to extort secrets from her that Vismes offered her to return to France by promising her a pension from the Minister BRETEUIL. She then asserts that she never wrote to M. THILORIER [Cagliostro's lawyer at the Collier trial], but that MM. de Vismes, Rey de Morande and Lanzague sent a letter which she had refused to sign on behalf of the lawyer against her husband. The countess never knew of a letter from the abbot of Saint André. As for the cook Augustino, who was in their service in London, if she believes him to be capable of all sorts of bad things, she can say nothing against him except that he attended the conversations of the three persons mentioned above without disapproving of anything. It is then mentioned that the Count took away her jewels "with her consent", and that she was pressured into doing so. She says she remembers that, during her imprisonment in the Bastille, M. de LAUNAY had told her "that she had been too reserved in the trial in favour of the Cardinal & M. le Comte, & that this had cost her a few more months in the Bastille". She reports other remarks made by the Governor of the Bastille to dissuade Cagliostro from bringing a case against him, that it would be like attacking M. de Breteuil and that he would inevitably lose the case [in June 1786, Cagliostro had sued the Governor of the Bastille and the lawyer Chenon for failure to return the goods and papers sealed at the time of his arrest in June 1785; having been obliged to withdraw for want of evidence, Cagliostro's claim was rejected in July 1787.] Finally, the Countess of Cagliostro attests that her husband "never prevented her from attending the worship and service of his religion"... The document was signed by her, as well as by the notary Köhly and two witnesses, and then certified as legal on the following day by the Mayor-Burgomaster of Biel, who had the city seal affixed.
Не пропустите последние новости о наших инициативах и аукционах.
|