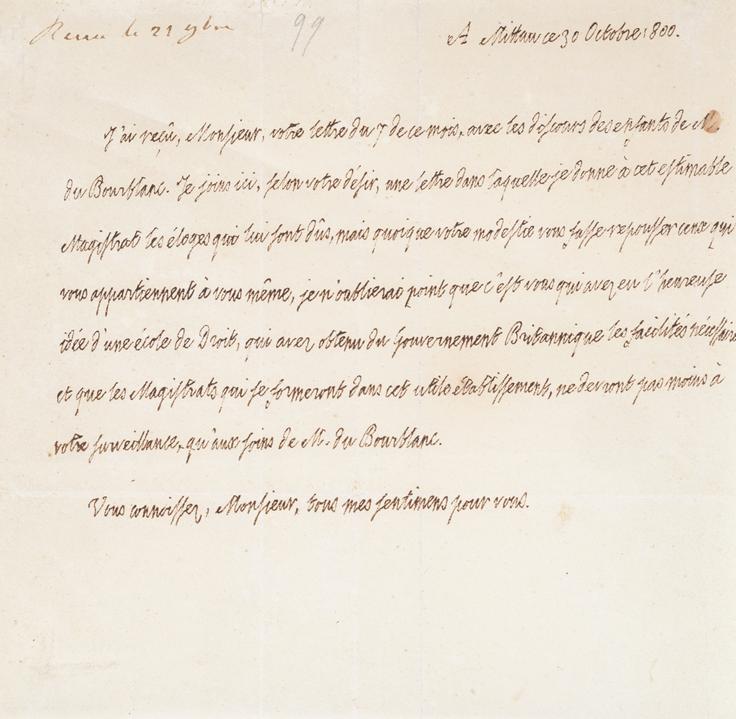 Autograph letter to the Count of Viomesnil. Mittau (at the time part of the Russian Empire), October 30, 1800. 3/4 p. in-12 square, in a fine, tight handwriting, envelope with preserved red wax seal with the coat of arms of France. The French law school for emigrants, opened in England, with the help of the English Government, by Count Saturnin Marie Hercule Du Bourblanc (1739- 1819), former Advocate General in the Parliament of Rennes. The tone of this letter perfectly illustrates the firmness of character of Louis XVIII, who never lost his dignity and maintained an unshakeable faith in the future despite the advances he may have suffered during his 23 years of exile, as Chateaubriand pointed out in the “ Mémoires d’outre-tombe ”. “I received, Sir, your letter of the 7th of this month, with the speeches of Mr. Du Bourblanc’s children. I enclose herewith, in accordance with your wish, a letter in which I give this esteemed magistrate the praise due to him, but although your modesty makes you reject those that belong to you, I shall not forget that it was you who had the happy idea of a law school, you who obtained the necessary facilities from the British Government, and that the magistrates who will be trained in this useful establishment will owe no less to your supervision than to the care of M. Du Bourblanc. You know, Sir, how I feel about you.” Louis XVIII stayed twice in the Duchy of Courland, which had been part of the Russian Empire since 1795: first in the rich dukes’ castle in Mittau, now Jelgava in Latvia, from March 1798 to January 1801 - he was expelled from it by the Tsar who was trying to get closer to Napoleon Bonaparte - and then in the modest Blankenfeld Castle for three weeks in August 1804.
Не пропустите последние новости о наших инициативах и аукционах.
|