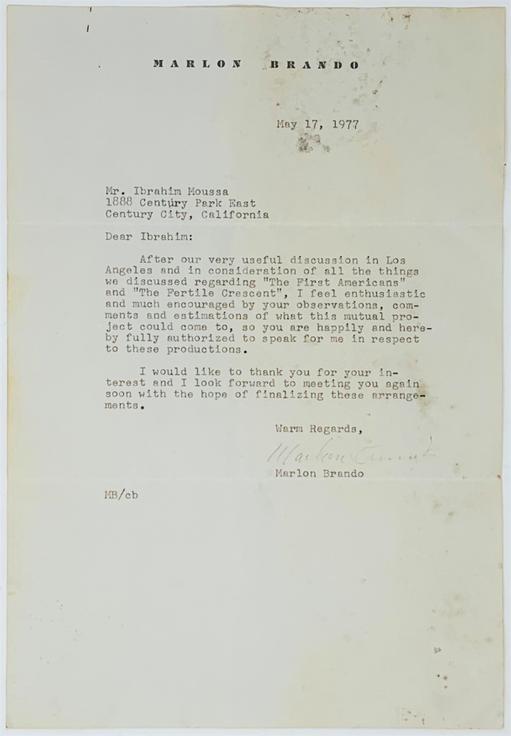 Prev Lot | Auction | Lot Next
1 500 1 800
On headed paper, n.p., 17 May 1977. ¾ p. in 4. In English. Small stains, creases. «[…] After our very useful discussion in Los Angeles and in consideration of all the things we discussed regarding “The First Americans” and “The Fertile Crescent”, I feel enthusiastic and much encouraged by your observations, comments and estimations of what this mutual project could come to, so you are happily and hereby fully authorized to speak for me in respect to these productions. I would like to thank you for your interest and I look forward to meeting you again soon with the hope of finalizing these arrangements. […]». Marlon Brando, a legendary American actor and director, is recognised as the most influential actor in 20th century cinema. Having studied with Stella Adler, he is considered one of the first actors to introduce the Stanislavski system and method of acting to the general public. The principle of this type of acting is to get completely under the skin of your character, forgetting the script and leaving room for improvisation. «It doesn’t matter whether the acting is good or bad, what matters is that it is true», according to Stanislavski, the actor had to be the character twenty-four hours a day. Marlon Brando does not overact scenes, he seems to live them naturally and his characters come across as even more real. With major performances, charisma and screen presence he has inspired actors of his generation as well as those of today. He was also an activist for many causes, including the civil rights movement and various Native American movements, a supporter of the American Indian Movement. In 1973, he turned down the Oscar for his role in «The Godfather», sending activist Sacheen Littlefeather in his place, who said the actor was giving up his award because of the poor treatment of Native Americans in the film industry. Also an anti-apartheid activist. In 1964, he promoted a boycott of his films in South Africa to prevent them from being shown to a segregated audience. He participated in a 1975 protest rally against US investment in South Africa and for the release of Nelson Mandela. In 1978, Brando narrated the English version of Raoni, a French-Belgian documentary film that focused on the life of Raoni Metuktire and the issues surrounding the survival of the indigenous Indian tribes of north-central Brazil. Ibrahim Moussa, born 1946 in Egypt, died 2012 in Los Angeles, California, was an Egyptian and American businessman and film producer.
Не пропустите последние новости о наших инициативах и аукционах.
|