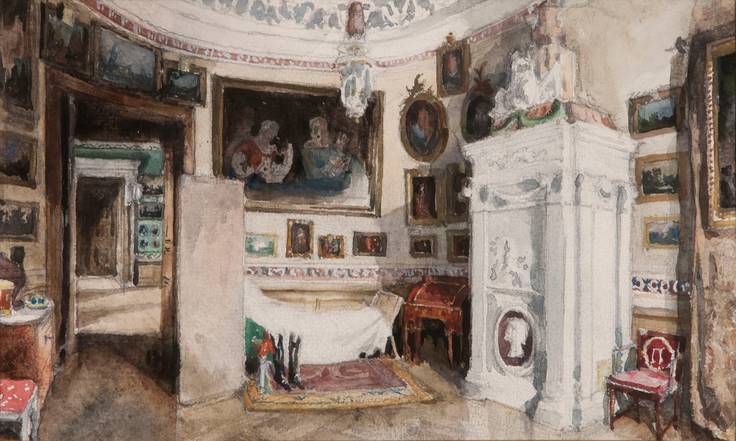 Cabinet of Pavel I in Gatchina, 1924 Watercolour on paper 16 x 26,5 cm Provenance : Private European Collection EXHIBITION and LITERATURE: RUSSES. Musée de Montmartre, Paris, 20 June-21 September 2003 Exhibition catalogue, ill. page 172 In the early summer of 1924, the director of the Gatchina Palace, Vladimir Kuzmich Makarov, made an unusual decision concerning studying and preserving the artworks from different times - the Palace’s collection. He provided employees of museums and libraries with rooms to live at the Palace free of charge, in return, they had to explore collections, give lectures, and write scientific articles. It helped to gather people with the spirit of art and similar interests: art critics and historians, librarians and archivists, artists and architects. That summer Alexander Benois lived in the Kitchen Wing of the Gatchina Palace. His neighbors were famous in Russian art personalities: N.E. Lancere, Z.E. Serebryakova, A.A. Ol, D.A. Schmidt, P.I. Neradovsky and others. In their spare time, artists took the opportunity to paint in historical interiors. In addition to the work of A. Benois, presented in our catalogue, there are several well-known watercolor paintings from this series in private collections. They depict other rooms of the Gatchina Palace: the bedroom and boudoir of Empress Maria Alexandrovna, the study of Alexander II. In total, there are about eighty artworks in watercolor, oil and pastel, created in the mid- 1920s at the Gatchina Palace and the Park by its inhabitants of that time.
Do not miss the latest news on our initiatives and our auctions
|