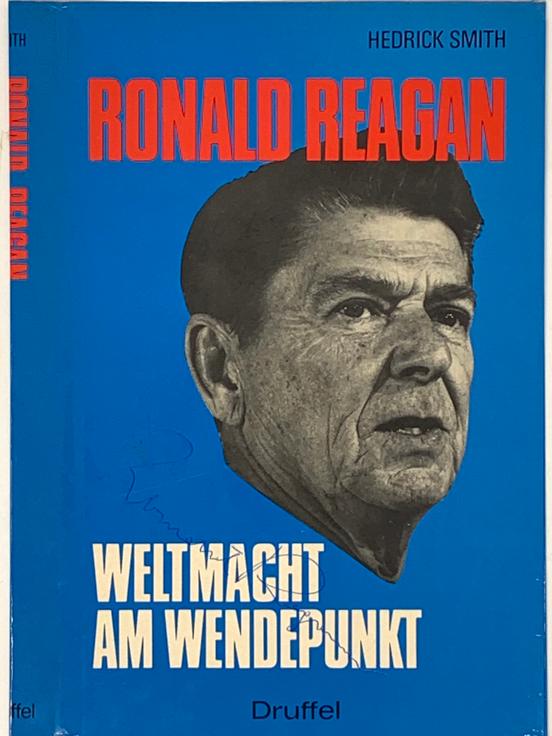 publisher Druffel - Leoni am Starnberger, Zürich. Hardcover, bound with dust jacket, 304 pp., ill., in German. 13 x 21 cm Hedrick Smith, a journalist born in Kilmacolm, Scotland, on 9 July 1933, (Pulitzer Prize for his book "The Russians"), traces the life and rise of former Hollywood movie actor Ronald Reagan, his political career, his governorship of California, and finally one of America's most exciting election campaigns. Detailed notes, arranged alphabetically, are intended to give the interested reader access to American politics and to facilitate understanding of the contexts and backgrounds. American politician from the Republican Party, Ronald Reagan was the 40ᵉ President of the United States from 1981 to 1989. His 1980 presidential campaign against Jimmy Carter was conducted on domestic political issues and during the American hostage crisis in Iran. His conservative programme was built around lowering taxes to stimulate the economy and increasing the defence budget. He won the election and became, at the age of 69, the oldest man ever to be elected President of the United States. During his inaugural speech in January 1981, the 52 Americans held hostage by Iranian students in the US embassy in Tehran were released. This was a landmark event that contributed to the President's widespread popularity. On 30 March 1981, in Washington, he was the victim of an attempted murder. He was wounded by a bullet but recovered quickly. Reagan believed that God had spared his life so that he could achieve great things He was re-elected in 1984, again by a landslide. The second term of the Reagan administration was marked by the Iran-Contra affair or Irangate, a political-military scandal, which revealed the secret sale of arms by the United States to Iran despite the embargo on that country. Despite this, his popularity remains very high. Due to health problems, he retired from politics at the end of his term. He died on 5 June 2004 in Los Angeles.
Не пропустите последние новости о наших инициативах и аукционах.
|