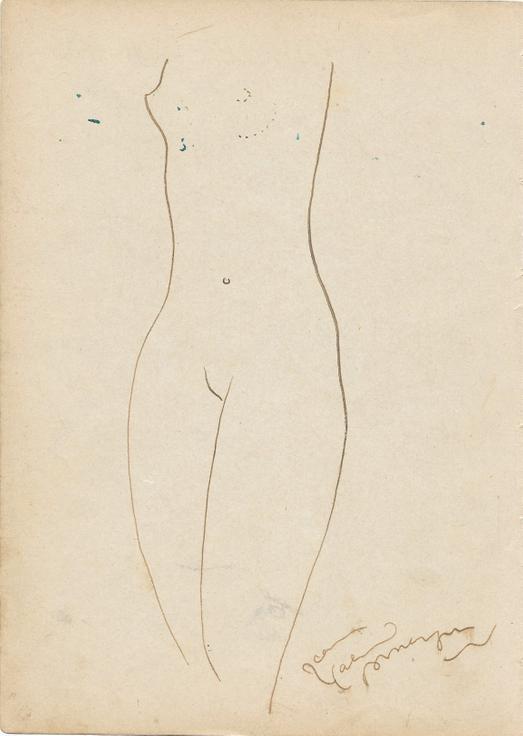 1p.18 x 6 cm Nude, original drawing signed "Jean Gabriel Domergue" lower right, brown ink and pen. On the back, a comic strip by Alain Saint-Ogan. Two original drawings, blue ink, pen and lavis, with autograph captions, representing a horse, lying down and then running. Signed and dated lower right "Alain Saint-Ogan March, 1949 : "Marcel, the horse of Zig et Puce is lazy, but he likes good music and... to go and listen to Pasdoc he does what everyone else does, he runs down rue des Petits-Champs...". Joseph Charles Louis Jean Gabriel Domergue, a French painter and engraver often described as the "inventor of the pin-up" because of his portraits of wide-eyed, slender-necked Parisian women in the 1920s, was a sought-after portraitist in aristocratic circles and also worked as a designer for famous couturiers including Paul Poiret and Henry Marque. In 1955, Domergue was appointed curator of the Jacquemart-André Museum in Paris, and was later made a Chevalier de la Légion d'honneur and a member of the Académie des beaux-arts. Alain Saint-Ogan, French comic strip author and illustrator. A major figure in European comics, he began writing comics in 1925, creating Zig et Puce (two young heroes and their companion Alfred the penguin, constantly travelling around the world, trying in vain to get to America to make their fortune) for the family weekly Dimanche-Illustré. This was the first important European series with a text written only in speech bubbles, and from 1927 onwards it was to enjoy unprecedented success. None of the many other characters he created, such as L'ours Prosper or Monsieur Poche, have achieved comparable fame. The singer André Pasdoc, whose real name was Dimitri de Salkoff, ran the Parisian cabaret L'Echanson from 1948 to 1960, at 49 rue des Petits-Champs.
Не пропустите последние новости о наших инициативах и аукционах.
|