LEWIS CARROLL (author) JOHN TENNIEL (illustrator) Alice’s Adventures in Wonderland [and] Through The Looking-Glass And What Alice Found There. London, Macmillan And Co. Limited, 1932. 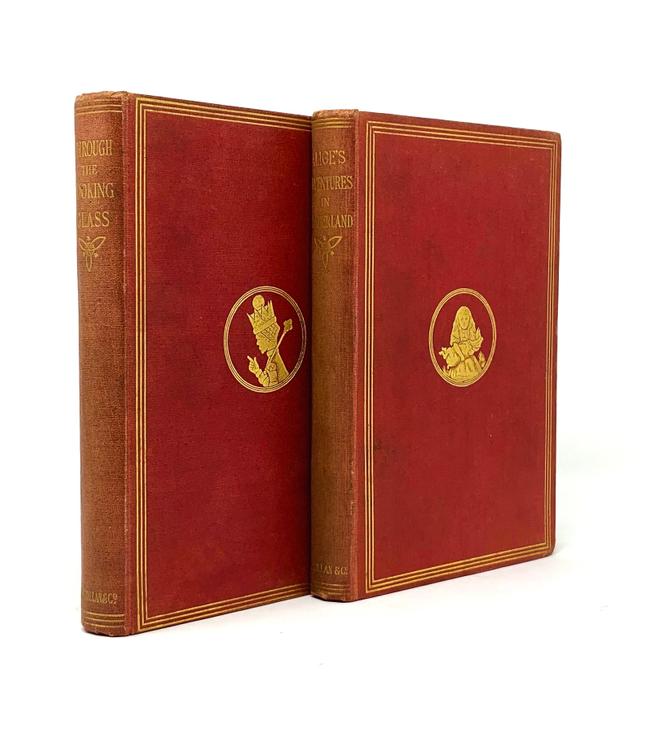 8vo. 2 vols; publisher’s red cloth with triple-line panels to sides enclosing pictorial roundels to all 4 boards, spines lettered and decorated in gilt, all edges gilt; pp. [xiv] + 195 + [i]; [xvi] + 227 + [i] + [2], adverts.; with a total of 92 fine illustrations after the original wood-engravings by Tenniel; clean and attractive copies forming a convincing pair, with a gentle patina of age, uniform fading to spines, light overall rubbing, and some pinkish bleed to lower margin of front pastedown of Wonderland, otherwise internally clean and sound throughout. Sold with a loosely-inserted 3-page autograph letter signed in ink by illustrator John Tenniel on laid headed notepaper “10, Portsdown Road, Maida Hill, W.”, watermarked Parkins & Gotto, and dated April 1, 1901, addressed to the British poet and critic William Cosmo Monkhouse (18 March 1840 – 20 July 1901) just 3 months before the recipient’s death: “Dear Mr. Monkhouse….”. He thanks him for sending the monograph, which he describes as “excellent in every way” (presumably an article in the Art Journal of 1901 which was published on the announcement of the artist’s retirement). Tenniel then, however, confesses to “a feeling of disappointment” in that “Three of the Selected Cartoons have been discarded, without consulting me, to be substituted by the 3 wretched ones of the late Queen, which were not in the list of subjects at all”. His work, he bemoans, is represented “at its very worst, whereas the idea and desire was of course to show it at its very best!”. He goes on to ask for Monkhouse’s opinion on the decision which “quite spoils the book!!!”. In his respected biography of the artist “Sir John Tenniel, Alice’s White Knight” (Scolar Press) the author Rodney Engen refers to Monkhouse’s survey of Tenniel’s career as “lightweight” being “long on illustrations and short on critical comments”. In Engen’s opinion its contribution lies in the fact that it includes Tenniel’s personal choice of artwork. Fascinatingly this letter debunks that notion and is also characteristic, in its tone, of the artist’s fastidious and exacting nature. Famously Tenniel was unhappy with the printing of his wood-engraved illustrations in the first edition of Alice, in 1865, which led to the edition being pulled and the original sheets being sent to Appleton & Co. in the United States.
Не пропустите последние новости о наших инициативах и аукционах.
|