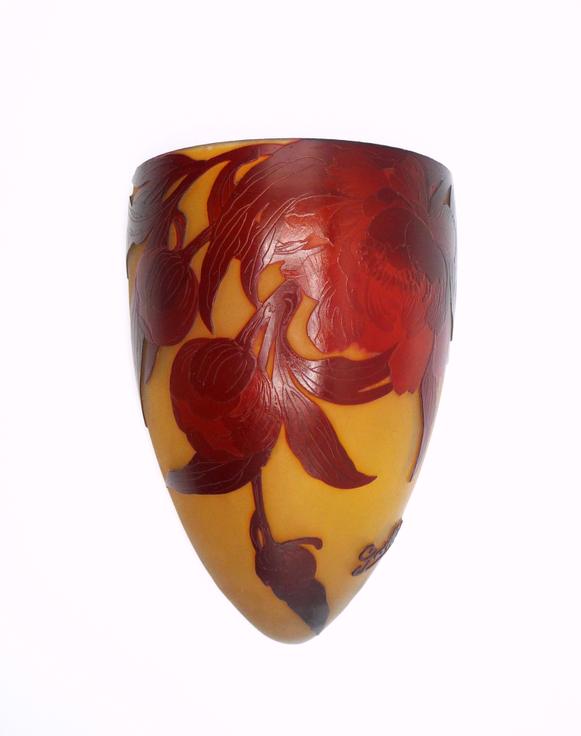 Prev Lot | Auction | Lot Next
900 1 000
Signed ‘Gallé’ 23 x 15.5 cm Émile Gallé was born in Nancy on May 4, 1846. He was a French industrialist, glassmaker, cabinetmaker and ceramist. He was one of the most important figures in the applied arts of his time and one of the pioneers of Art Nouveau, one the founder (with Victor Prouvé, Louis Majorelle, Antonin Daum et Eugène Vallin) in 1901 and first president of the Ecole de Nancy. After his studies and various apprenticeships abroad, he returned to Nancy where, having new ways of exploring the technique of glass, he set about imitating nature with striations, knots, splinters, reflections, shadows and marbling. After his participation in the Universal Exhibition of 1878, his fame spread throughout the world and he became one of the most famous glass artists in the world. Although Gallé knew the technique of glass paste, most of his production was blown, not in glass but in crystal, that is to say with the addition of lead salts. To the initial gob of crystal, Gallé added new colored layers of metallic oxides, inclusions, before blowing the piece of crystal, to rework it with new inclusions, appliques, gold or silver leaves. From the crystal hall, the pieces were then reworked by engraving, with the wheel for the most precious, with hydrofluoric acid for the most common. A cameo decoration, most often floral, was thus created, a fortunate combination of the chance of blowing and the know-how of the engraver-decorators. Emile Gallé is also the inventor of several techniques, including that of glass marquetry (patented in 1898): fragments of crystal of different colors in one or more layers, previously shaped, are incorporated with a pair of tongs in the goblet still in fusion. Gallé was one of the only artists to master this technique, which is extremely difficult to do. Rare are the pieces using this process, which will not be practiced after 1904.
Не пропустите последние новости о наших инициативах и аукционах.
|