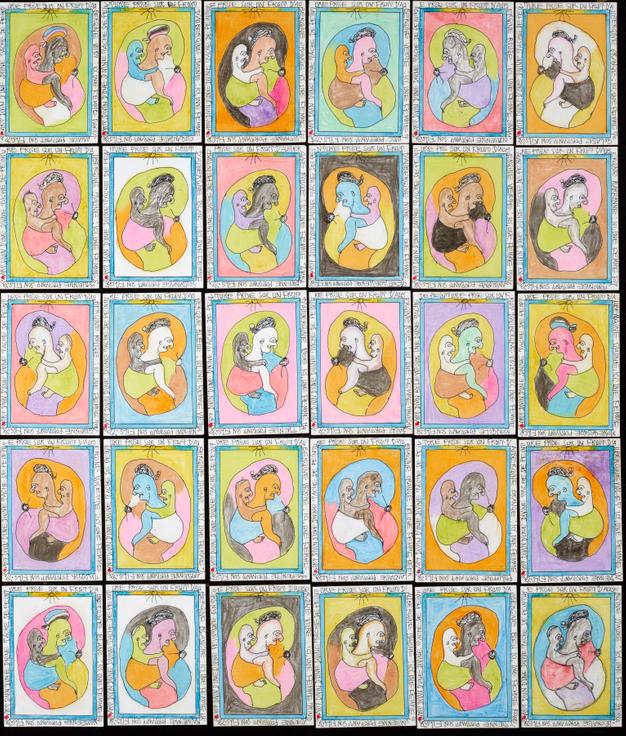 series of 30 drawings, signed on reverse ballpoint pen, coloured pencil, pencil on cardboard Executed in 2006 «I observe, and what I see delights me. And so I want to imitate.» The present series contains 30 small cards painted with ballpoint pens and crayons, featuring a mother carrying her son and surrounded by text. Through juxtaposing characters, such as mother and child, an aubergine, and text, the artist reinterprets the world. This series is a chronicle of symbols: it conveys the artist’s interest in universal human experiences, history, tradition, spirituality. Frederic Bruly Bouabré was a thinker, poet, encyclopaedist, creator, and artist. Born in Zéprégühé, in Côte d’Ivoire, Bouabré served in the French West African Navy and began his career as a government clerk in the colonial administration of French West Africa in Dakar, Senegal. In the late 1940s, he had a vision that transformed his life: he then called himself ‘Cheik Nadro the Revealer’ and dedicated his life to philosophical research into the state of Africa and the meaning of life. He worked as an informant and researcher to French ethnographers and anthropologists, collecting and archiving information about his native peoples and other West African communities. In the late 1970s, Bouabré began to draw on found cardboard, combining image and text. From the 1980s onwards, as the scope of his interests grew, he embarked on an all-encompassing project, drawing from observation almost daily. His work was presented at Venice Biennale National Pavilion, Venice Biennale International Exhibition, Istanbul Biennial, Gwangju Biennale and is part of MOMA collection. His artworks were also exhibited at Tate Modern, Palais de Tokyo and the Centre Pompidou, Guggenheim Museum, Bilbao, and the Mori Art Museum in Tokyo.
Non perdere le ultime notizie sulle nostre iniziative e le nostre aste
|