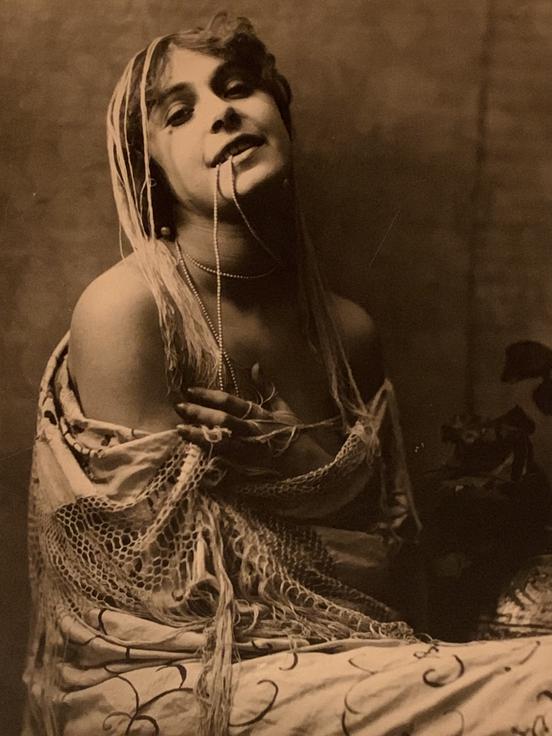 Inscribed in cyrillic on the reverse А Cyrillic stamp «Photographer N. I. Svishchov-Paola» and stamp of the Publishing house “Iskusstvo” (on the reverse) Gelatin silver print 30 х 23.8 cm Provenance: Collection of Borodulin Nikolai Svishchov-Paola (1874-1964) was born in Moscow in the family of a small linen merchant. When his father went bankrupt and was forced to sell the store, Nikolai Svishchov became a retoucher’s apprentice and then an apprentice photographer in the photo studio of Yegor Ovcharenko. In 1895 Svishchov opened his own photographic studio and started to work with all the passion inherent in his nature. He began to look for new methods of portraiture. Adopting from professional photographers a lot of useful things in the processing of plates and photographic paper, lighting techniques, etc., he borrowed their desire for external effects and unusual forms in photos. Svishchov mastered the now almost forgottentechnique which gives the effect of brush strokes on the canvas. He was fond of blurred images made with a «monocle» lens. He was the first to invent the idea of printing images on porcelain and milk glass, which had a resounding commercial success. In 1908 Svishchov acquired the atelier «Paola» of the photographer N. S. Korotkov on Kuznetsky most, together with the equipment and the name of the company «Paola». Since then, Nikolai began to be called either Svishchov or Paola, and when the time came to get a new passport, his double surname Svishchov-Paola became official. With the acquisition of the photographer’s studio Svishchov began a new life: there came a time of happy creative work. Here were created the best works of the photographer: «Sitter», «Blonde», «Men’s portrait», «Dream», «Calling», etc. All these photos were exhibited in different photo exhibitions, invariably receiving awards for them. The fame of the photographer was growing every year and Svishchov received in his studio «Paola» many famous actors, writers, and scientists. In 1910-1920s Svishchova-Paola took part in international photo exhibitions in the USA, Canada, Great Britain, France, and Italy. After the war, N.I. Svishchov-Paola worked on the creation of photographic portraits of Soviet academics, of actors and performances of the Vakhtangov State Academic Theater and the Moscow Musical Theater of Nemirovich-Danchenko. In the second half of the 1950s, Svishchov received official recognition through exhibitions held in the Soviet Union and abroad which helped to rediscover the magnificent world of easel photography of this brilliant master.
Non perdere le ultime notizie sulle nostre iniziative e le nostre aste
|