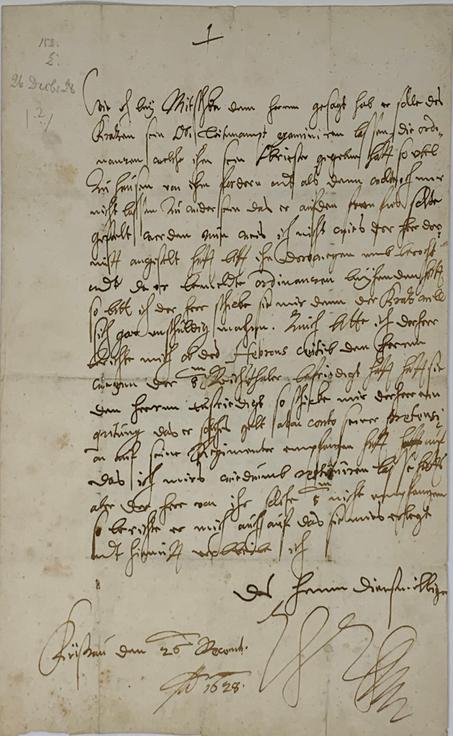 Güstrow (“Küstrau”), December 26, 1628. 1 p., double sheet with address. Address sheet with missing seal. Minimally stained; slightly damaged, without affecting the text. Nice letter to his trusted military leader Hans Georg von Arnim (Boitzenburg; 1583-1641). The address is: “Röm Kay Matt to deliver to the best Feldtmarschalken Herren Hans Girgen von Arnim Prenzlau”: “As I told the gentleman at Mitschke [camp near Mitschkau] he should be responsible for the wreath. to have his obedience examined, the ordinances which his superior had given him so badly at home demanded of him, and then I did not want to let myself be again that he should be set free, now I do not know how the gentleman has started, so I ask him to report this and as he has reported ordinances to the two, so I ask the gentleman to send them to me, because the Kraz wants to make himself innocent. I also ask the lord to tell me if the Hebron has satisfied the lord because of the 8 rulers, has if she satisfies the lord, the lord will send me a receipt that he has received such a receipt a bon conto of his pretension on his regiments that I will have it returned to me, but that he lord has not received such a receipt from her, he will also report to me that she has killed me, and I will remain the lord’s servant”. Print: Friedrich Förster (ed.), Albrechts von Wallenstein unprinted, hand-written confidential letters [...]. Berlin 1828, Vol. I., No. 259, p. 405 f. (dated November 26, 1628). Wallenstein defeated the Danish king Christian IV in 1626 and received the entire Duchy of Mecklenburg as a fief from the emperor. Wallenstein chose Güstrow Castle as his residence. With him, the Frühba-90 rock was to gain triumphal entry into the Güstrower castle. The artful general planned the completion of the south wing and the redesign of the ballroom. But the project never came to fruition: in early 1630, the emperor disempowered his commander; Wallenstein was also overthrown as a duke in Güstrow. With the sudden turn of his political fate, Wallenstein’s ambitious restructuring plans failed.
Non perdere le ultime notizie sulle nostre iniziative e le nostre aste
|