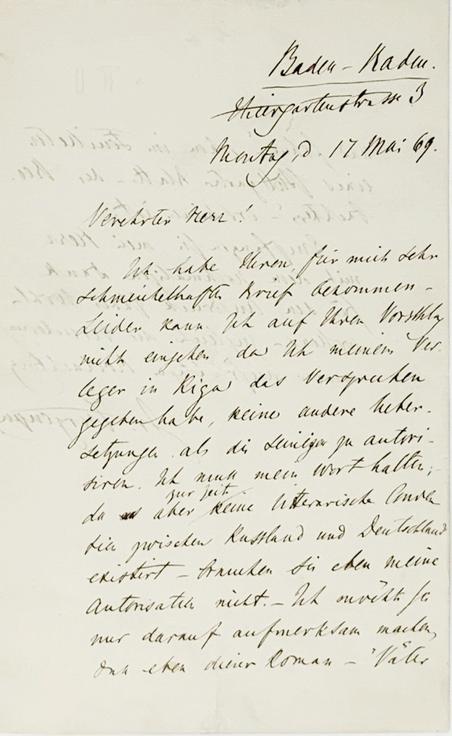 Baden-Baden, May 17, 1869. 2 p., the sheet is folded in half. 20, 5x12, 7 cm. In German. There are the writer’s initials «IT» are embossed in blint in the upper-left corner. Very good condition. The letter says about Turgenev’s refusal onto the German writer’s request for the rights for German translation of the novel «Fathers and children». «...Unfortunately, I can’t accept your offer because I promised to my publisher in Riga not to authorize any other translations other than his. I must keep my word; but as there is currently no literary convention between Russia and Germany. You don’t need my authorization. I would like just to draw your attention to the fact that this particular novel... was already published in the literary Department of the Stuttgart newspaper «Beobachter... «. «Fathers and children» first appeared in the Stuttgart newspaper «Der Beobachter» (1865, nos. 228-306, September 30-December 31). This translation, «very unsatisfactory», according to Turgenev’s review in a letter to Ludwig Piech dated January 3 (15), 1869, was based not on the Russian original, but on a French text with a foreword by Merime. Later, the translation of the novel in the Stuttgart newspaper was edited by L. Pich at Turgenev’s request, and in 1869 it was included into the first volume of Turgenev’s selected works in German, published by E. Vere (Turgenjew I. S. Väter und Söhne. Autorisirte Ausgabe mit einem Vorwort des Verfassers. Mitau, 1869). Turgenev wrote the following preface to this translation: «Instead of a preface, I will permit to myself to inform my benevolent reader that I guarantee in the most insistent way the complete accuracy of this translation. This is a satisfaction that has rarely, if ever, come to me. Here, at least, they judge you, praise you, or criticize you, by what you have actually done, by your own words, and not by the words of others.» Karl Mueller (1819-1889) was a German writer known by the pseudonym Otfried Milius. The letter was presented at an auction in Cologne on November 21, 1932. Published by: Turgenev I. S. Complete works and letters: In 30 volumes. Letters. In 18 vols. - 2nd ed., corrected and amended. Vol. 9. Letters, June 1868 - May 1869. Moscow: Nauka, 1995. - p. 211.
Non perdere le ultime notizie sulle nostre iniziative e le nostre aste
|