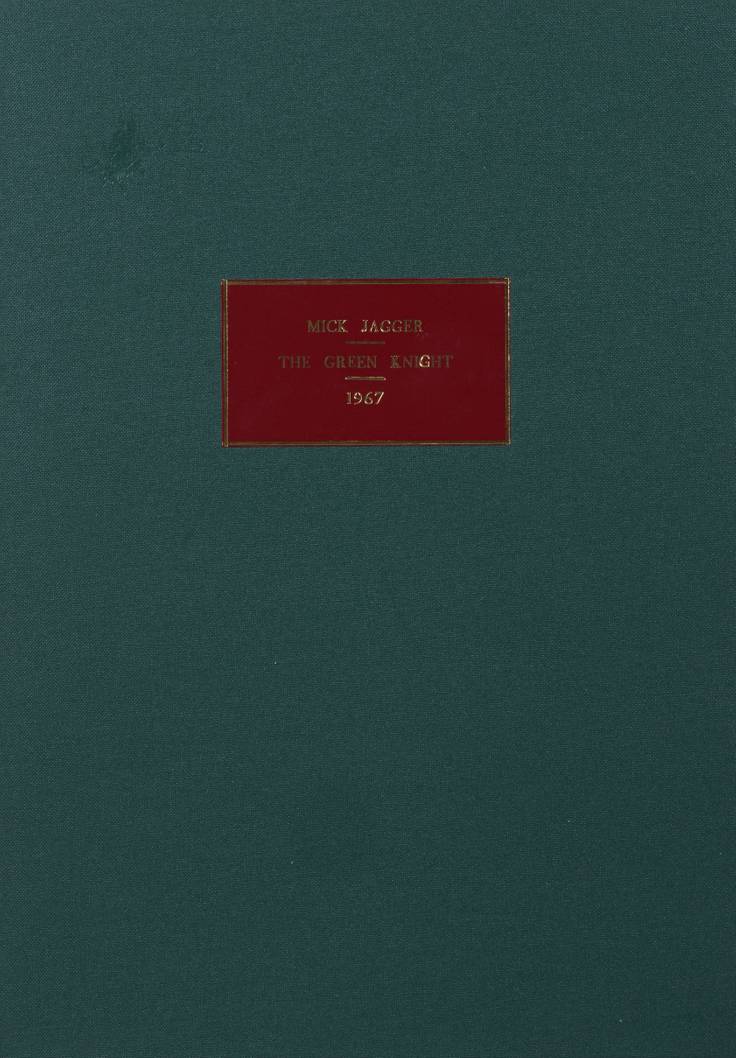 Prev Lot | Auction | Lot Next
12 000 15 000
Original Contract, 1967 Contract for “The Green Knight” 5th December 1967. One contract of 6 pages, typescript on thin paper 32,5x20cm stapled to red card backing, signed by Mick Jagger, Christophe Gibbs and Nigel Lesmoir Gordon, plus Marianne Faithfull, Jagger’s girlfriend at the time, as witness, with a typescript fi lm treatment of 16 pages stapled together at top left, 29x22cm, with manuscript annotations. A little chipping to folds, a little browning, very good condition. This unique pair of documents records a highly ambitious project that sadly never came to life. As Marianne Faithfull recalls in Faithfull: An Autobiography (2000): “Mick began taking acting lessons...Then there was THE MAN WHO SHOT MICK JAGGER and a whole slew of hippie projects. Christopher Gibbs and Nigel Gordon had written a script based on the mystical Middle English romance GAWAIN AND THE GREEN KNIGHT. Mick was going to play the Green Knight - Mick and Keith do the Middle Ages!” (pp. 149-50). Not only was Jagger going to star, this was also likely to be his debut as a producer. This contract is between Jagger and Christopher Gibbs, his interior designer, and Nigel Gordon, a fi lm editor working for the producer David Cammell, to produce a 25 pages treatment of the legend of Sir Gawain to be called provisionally, The Green Knight. The two writers were to start working on Christmas Day 1967 and deliver by 1st May 1968. We cannot be sure when the pair delivered their work, but it was nine pages short and had transformed from The Green Knight into The story of Venus and the quest for Arthur’s kingdom, a tale set initially in a Welsh gold mine in 1700 and 1968 New York before settling on an Arthurian England of knights, mystical ladies and an improbable red fl oating sphere. The project never went any further, but it is a fascinating snapshot of the projects that Jagger, the Rolling Stones and the counter-culture in general were beginning to get involved in as the 1960s progressed and their ambition grew. Neither was this the end of the road for Gibbs and Gordon as fi lm collaborators with Jagger - Gibbs was employed as Consultant Designer on Jagger’s breakthrough fi lm Performance, while Gordon’s boss David Cammell, the brother of the movie’s director Donald Cammell, was a co-producer. Sir Michael Philip “Mick” Jagger (born 26 July 1943) is an English musician, producer and actor. He is most famous for being the singer of the Rolling Stones. In 2003 he was knighted for his services to music. He is the songwriter of most of the songs in the band’s original repertoire. In addition to singing, he sometimes plays harmonica and guitar with the Rolling Stones. He is also an occasional actor.
Non perdere le ultime notizie sulle nostre iniziative e le nostre aste
|