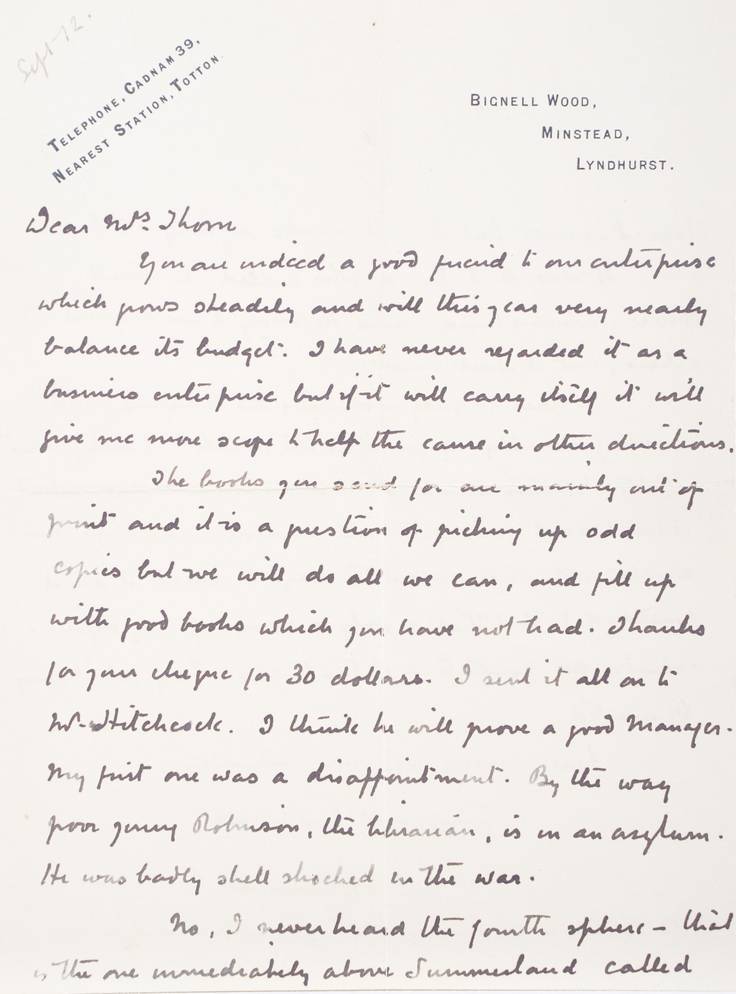 Prev Lot | Auction | Lot Next
2 300 2 500
Autograph Letter Signed and envelope. A.L.S. “A. Conan Doyle”, on “Bignell Wood, Minstead, Lyndhurst” paper, addressed to Mrs. THOM. 2 pages in-8. Envelope with stamp and postmark [13 Sep 1926], addressed to : “Mrs. Thom, Rocky Beach Farm, Lakeshore P.D., Anne Arundel Co., Maryland, USA”. Written in English. His interest in the occult. “….. No, I never heard the fourth sphere - which is the one immediately above Summerland called Rom-Summer but I will make inquiring & let you know. It was A. J. Davis who called the third sphere Summerland, and he may have named the others, but I don’t know. We are eagerly watching the heavens and events generally. If you read the article “Earthquake” in this month Occult Review, which I have asked them to send you, you will understand why. You should add what the writer says to what I said (enclosed) but that is only a corner of my information. All points to a catastrophe. Pray god it may be averted. Your message was very interesting Yours with best wishes A. Conan Doyle Mrs. Archer is in London & I hope to see her next week.” The Occult Review, a monthly magazine devoted to the study of supernatural phenomena and psychological problems, is a British monthly periodical published between 1905 and 1951. Quarterly from 1936 onwards. Between 1921 and 1929, the magazine published 13 letters written by Arthur Conan Doyle. In the ‘Correspondence’ section of the October 1926 issue, mentioned in his letter to Mrs Thom, is published ‘Prophecies of the Future’. Andrew Jackson Davis (1826-1910) A Stellar Key to the Summer Land (1868) Andrew Jackson Davis was a fi gure in the Spiritualism movement in the United States. He was born in Blooming Grove, New York. Andrew Jackson Davis enjoyed great fame as a clairvoyant and medium. He practiced healing using magnetism, according to the principles of mesmerism. He went into a state of trance and verbally dictated entire books to those around him. This method enabled him to produce a large number of scientifi c works. According to the common opinion of his time, he had never received any school education. Bignell Wood Conan Doyle, was the owner of the large house adjoining Bignell Wood with the same name. He used it, together with his second wife, as a sort of holiday home from 1925 until his death. Conan Doyle turned to spiritualism after the death of several close family members and the horrors of the First World War. It is said that Bignell Wood was used to hold seances and that local postmen refused to deliver mail to its door. It was also at Bignell Wood that he began his photographic “hunt” for fairies, photos included in his book, The Coming of Fairies, 1922. Sir Arthur Conan Doyle (1859-1930) Arthur Ignatius Conan Doyle. British writer and doctor. Creator of the world’s most famous fi ctional detective, Sherlock Holmes, to whom he devotes 56 short stories and 4 novels, the writer is the author of numerous science fi ction novels, historical novels, plays and poetry.
Non perdere le ultime notizie sulle nostre iniziative e le nostre aste
|