MARIE-ANTOINETTE AND THE MATTER OF THE NECKLACE. 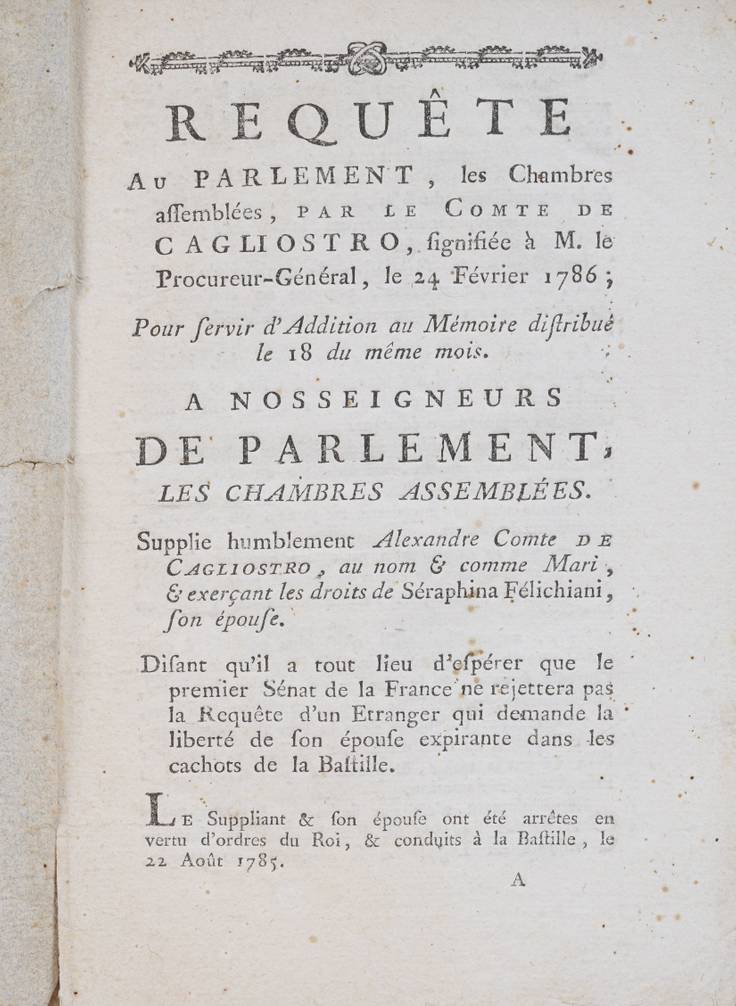 Prev Lot | Auction | Lot Next
100 150
CAGLIOSTRO (Giuseppe Balsamo, known as Count Alessandro di). Printed booklet entitled, Application to Parliament, the Assembled Chambers [...], served on the Attorney General, 24 February 1786. S.l.n.n. (1786). In-8, 5-(1 white), stapled under blank cover. 21x14 cm Involved in the “necklace affair”, the Count of Cagliostro was imprisoned for ten months, from 21 August 1785 to 1 June 1786, before being expelled. Here he asks for the release of his wife, locked up like him in the Bastille, adding that he would not ask for anything for himself: “Declared to take the body, he will wait in irons for the moment when justice, fi nally disillusioned, will give his innocence a shining testimony” (p.2). The story of the Necklace was one of the most important sources for “The Three Musketeers”,.A fl amboyant adventurer, alchemist and founder of Egyptian Masonry, the Count of Cagliostro (1743-1795) was immortalised by Dumas Sr., Sand, Nerval and Mozart, who exalted him in the fi gure of Sarastro, (High Priest of the Kingdom of Light, The Magic Flute, 1791) ... Printed following, a memorandum with consultation of February 1786 in favour of Jean-Charles-Vincent de Bette d’Etienville, another protagonist of the necklace affair, also imprisoned, (2)-31(1 white) pp.
Non perdere le ultime notizie sulle nostre iniziative e le nostre aste
|