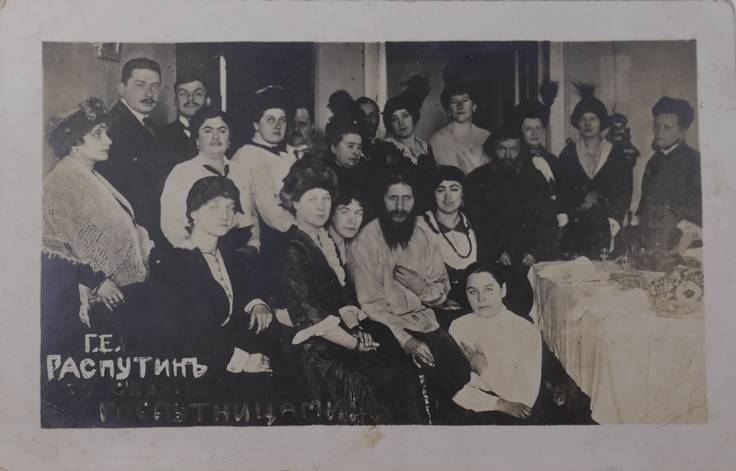 Postcard «Rasputin with his libertines». Moscow: Photogr. Enterprise «Ideal» (stamped on the back). 1914-1916. 8,5 x13 cm. Reproduction of a rare snapshot, after its appearance made a lot of noise in high society. From the memoirs of A.A. Vyrubova: «There is a photograph that was reproduced in Russia, as well as in Europe and America. This photograph represents Rasputin sitting in the shape of an oracle among the aristocratic ladies of his harem and confirms, as it were, the enormous influence that he had had in court circles. [...] I can give an explanation of this picture, since I myself am depicted on it. In the first days, only those people who, like Their Majesties, sought clarification on various religious issues, came to Grigory Efimovich; monastery, pr and the Holy Mysteries, the pilgrims gathered around him, listening to his conversations, and I, always «looking for » religious mood and consolation after eternal intrigues and evil of the court situation, listened with interest to the extraordinary conversations of a person who was not at all a scientist, but said that even scholars professors and priests found it interesting to listen. «(Taneyeva (Vyrubova) A.A. Pages of my life. M., 2000. P. 141-142). In a society differently interpreted the content of photos, as evidenced by the memories of the older sister of the Tsarskoye Selo hospital e.i.v. IN AND. Chebotaryova, February 5, 1917: « In the left circles a group that was shot three years ago went hand to hand: Rasputin at the table among the fans - Golovin, A.A. Vyrubova , etc. Shot with magnesium, after a revel; on the table wine, drying, fruit. He has a striking face. Golovin was considered to be the Empress and they sold this group for 25 rubles. I had to swear that she was just like I am the Chinese emperor « (V.V. Chebotareva Palace Infirmary in Tsarskoye Selo. Diary: July 14, 1915 - January 5, 1918 // New Journal. No. 82. New York, 1991. P. 206). Photographic enterprise «Ideal» was opened by a successful photographer Birgan Georgiy Leopoldovich. He owned several photo studios located on the central streets of Moscow, St. Petersburg and Riga. Interestingly, the photo studio, located at 40 Arbat, at the time of its discovery, was already the fourth such institution here. This fact did not prevent the photo workshop from outliving its competitors and working practically to the present day. In the «Ideal» on Arbat, 40 worked, as well as the famous photo artist M.S. Nappelbaum (1869-1958), who in 1918 made a number of historical portraits of V.I. Lenin, it is for them that we today know the Great Leader
Ne ratez pas les dernières nouvelles sur nos initiatives et nos ventes aux enchères.
|