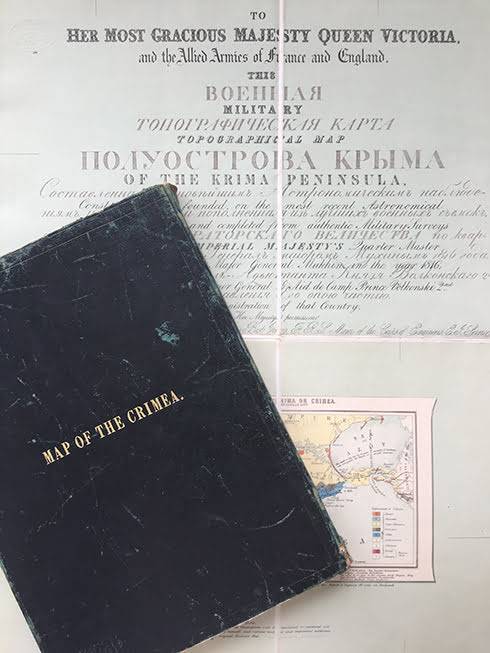 Военная топографическая карта полуострова Крыма составленная по новейшим астрономическим наблюдениям, исправленная и пополненная из лучших военных съемок, Свиты Его Императорского Величества по квартирмейстерской части Генерал- майором Мухиным 1816 года, по приказанию Г-на Генерал-адъютанта Князя Волконского 2-го во время управления Его оною частью. To her Most Gracious Majesty Queen Victoria, and the Allied Armies of France and England. This Military Topo¬graphical Map of the Krima Peninsula, constructed, and founded, on the Most Recent Astronomical Observations, verified, and completed from Authentic Military Surveys of the Staff of his Imperial Majesty's Quarter Master Ge¬neral's Department, by Major General Mukhin in the year 1816; by Express Command of Governor General & Aid de Camp Prince Volkonski 2nd. during his Administration of that Country. Is by her Majesty's Permission inscribed by her very Devoted and Faithful Servant Thomas Best Jervis, F.R.S. Major of the Corps of Engineers E.I. Service. Publication: [Williams & Norgate and Petheram (?)], London, 1854. Impressive wall-map of Crimea: a fine example of the first edition of this detailed document of military topogra¬phical intelligence produced at the outbreak of the war in the region. Based on the earlier survey by Major General Semyon Mukhin (1771-1828), it was published with significant amend¬ments and updates by Thomas Best Jervis (1796 - 1857), a major of the Army Corps of Engineers and member of the Geological and Geographical Societies. The map was subsequently re-issued in various formats, with editions published in Turin, Paris and Brussels. Making maps was Jervis’s passion and from 1846 he began to pitch his proposals for military cartography to Lord Aberdeen, insisting that the War Office needed someone to improve the geographical information available to expeditionary forces. The start of the Crimean war and lack of information about the territory that the British forces were to encroach proved Jervis’s point. Thus, with the permission from the War Office Jervis went to work with alacrity and created a map of the Crimea. Subsequently, on 2 February 1855, Lord Panmure finally made the foundation of an intelligence department official, which was to be called the Topographical and Statistical Department and of which Jervis was to take command. Provenance : Williams & Norgate, Importers of foreign books, London (paper labels to outer panels; probably the pu¬blishers, together with Petheram of Holborn, as a written inscription on another copy we had suggested it). Description and Bibliographical references : Large engraved wall-map (130.5 . 235 cm) dissected into 40 panels and mounted on two sheets (East and West) of linen, small geological map as inset with hand-colour, four sheets of letter-press laid on outer panels providing geographical and military information on the Russian Empire: “A General Account of the Extent of the Rus-sian Empire …”; “Organization of the Military and Naval Forces of Russia …”; “Miscellaneous useful Information connected with pre¬sent Seat of War, and the Powers and States engaged therein”; and “Remarks on the proper Pronunciation of Foreign, and Asiatic Words in particular”. Kept in the original green slip case, lettered “Map of the Crimea” on the upper panel. Wade, Spies in the Empire: Victorian Military Intelligence, p.25.
Ne ratez pas les dernières nouvelles sur nos initiatives et nos ventes aux enchères.
|