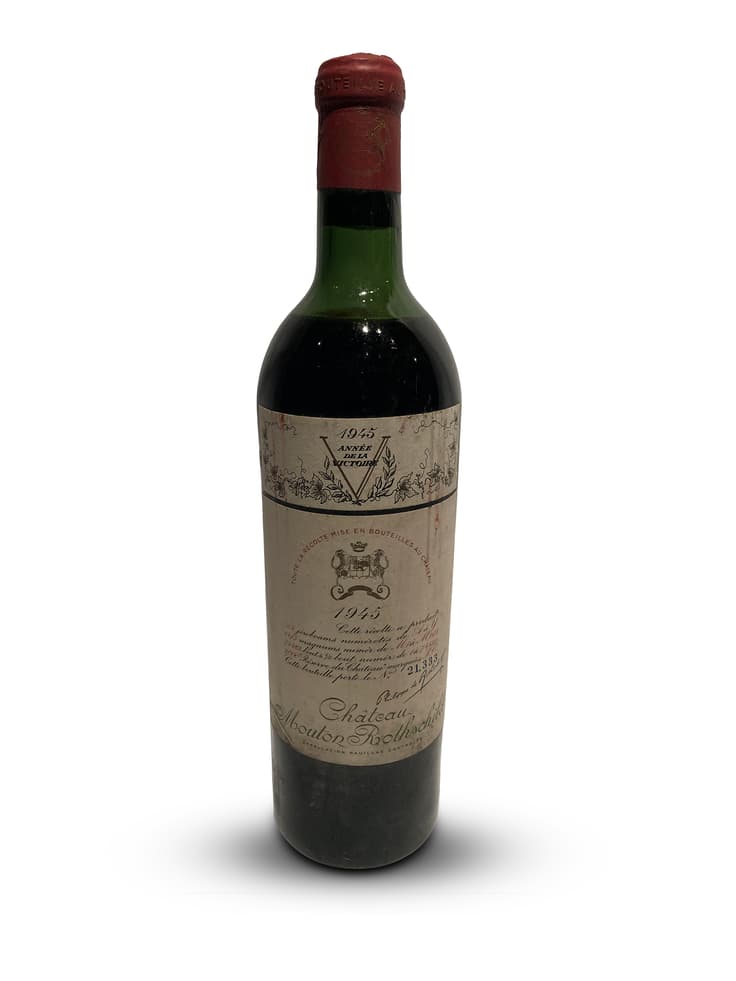 Haute épaule, étiquette tachée High shoulder, Stained Label Label Artist: PHILIPPE JULLIAN (1921 – 1977) For the 1945 millésime, a symbolic drawing was chosen by Baron Philippe to celebrate the return of peace and the joy of life finally found. He entrusted the design to a young, then unknown artist, Philippe Jullian (1921-1977). Among the various projects that Philippe Jullian submitted to Baron Philippe, the latter chose the «V» for Victory, which Churchill had made a rallying sign for the free world for five years. Provenance: Private wine cellar from a Villa in the South of France (preserved in the cellar with regulated hydrometry and temperature) Harvested to the sound victory after the Second World War, Château Mouton Rothschild 1945 is one of the best vintages of the century. Château Mouton Rothschild 1945, Pauillac, Bordeaux, France ‘Année de la Victoire’ The 1945 vintage was produced shortly after the end of World War II. The label was designed by Philippe Jullian, and it determined a unique tradition: Artists creating wine labels. All the first growths excelled in 1945, yet it is widely recognised that Mouton, then a ‘lowly’ second growth, was the wine of the vintage. Moreover, for many years the 1945 fetched higher prices at auction than the first growths. This boosted Baron Philippe’s campaign for Mouton’s promotion to first growth, which only succeeded in 1973. In 1945, the property had been confiscated by the Germans during the war and was well run by their appointed weinführer whose job was to keep the Bordeaux wine trade functional.Baron Philippe de Rothschild had fled to Britain after escaping from prison, but once the war was over he returned to supervise the harvest at Mouton. He was flamboyant and artistically inclined and had taken over the management of the family property in 1923 at the age of twenty. In 1945 he started commissioning the famous ‘artist labels’, one for each vintage, and in the 1960s he opened a Museum of Wine in Art. The Bordeaux 1945 vintage Heavy frosts on 2 May - ‘an unusually late date’ – severely reduced the crop in the Médoc. Thereafter the climate was superb, with a hot, dry summer that led to an early and uncomplicated harvest. The grapes were super-ripe, with some batches apparently reaching an alcohol level of 15%. Quantities were considerably reduced and this was the smallest vintage since 1915. Bottles produced: 74,422, plus 1475 magnums and 24 jeroboams
Do not miss the latest news on our initiatives and our auctions
|