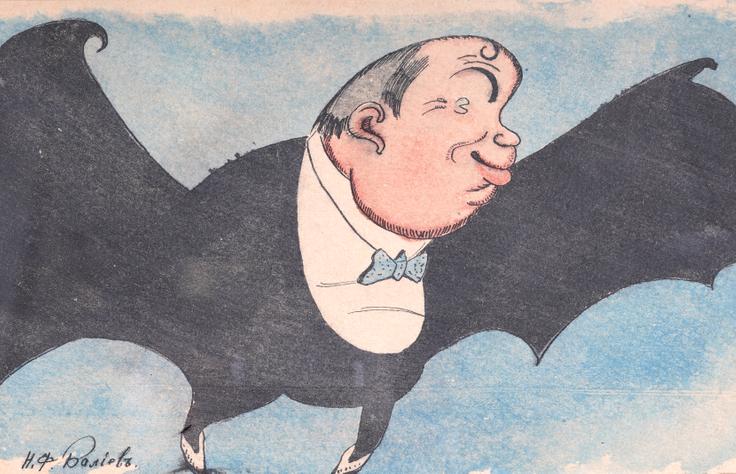 inscribed “N. F. Baliev” in Russian watercolor on paper 15,30 x 23 cm Enclosed: the program «Balieff’s Chauve -Souris of Moscow, American Season.» (1925) with the variant of the caricature reproduced on the back cover. The Théâtre de la Chauve-Souris (The Bat Theater) in its heyday (1908–1943) was an internationally known musical theater under the direction of Nikita Baliev. Founded in Moscow in early 1908, it eventually became, because of the exigencies of history, a touring theater, a company equally at home in Paris, London, New York, and elsewhere. Despite its enormous popularity among general audiences, the Chauve-Souris was the first theater of its kind to enlist in its ranks artists from the Russian Imperial theaters, the public dramatic and light-opera theaters, and the experimental or avant-garde theaters as regular or frequent visiting performers, musicians, or designers. It was also one of the first, if not the first, theaters of its kind (at least in Western Europe) to engage a woman as its choreographer, Mme Elizabeth Anderson. On its first appearance in the West, Parisian critics variously identified the theatrical character of the Chauve-Souris as that of a cabaret, a night club, or a music-hall theater, none of which, as we shall see, adequately defines its nature. To understand the aesthetic premises of Baliev’s theater, we need to review briefly the origins of the Chauve-Souris and the early careers of Nikita Baliev, Elizabeth Anderson, and Sergei Sudeikin, the principal designer for the Paris opening. The artistic mastery each brought to the group’s first “saison russe” in 1920–21 produced a collaboration that led the critics to call the Chauve-Souris “une école d’avantgarde.” (+) This lot is under temporary importation and is subject to import tax (EU).
Do not miss the latest news on our initiatives and our auctions
|