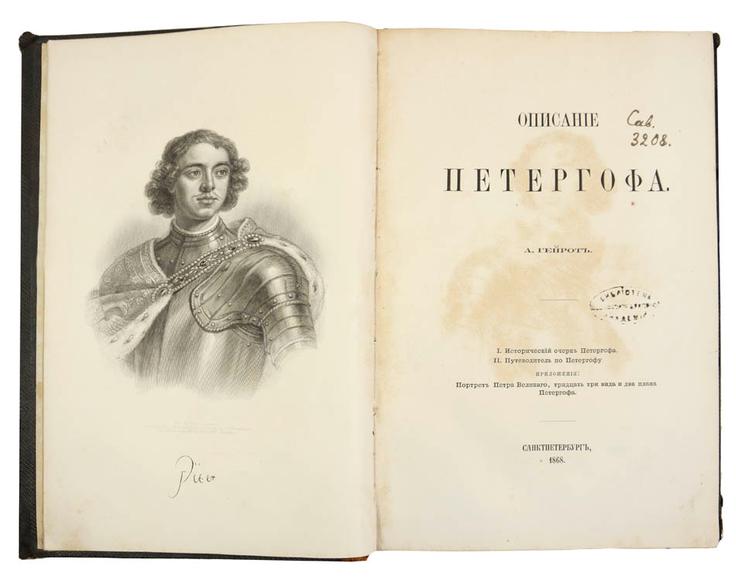 Octavo, two parts in one volume. Half-title, steel-engr. frontispiece, title, [4], iv, [2], 131, vi pp., with 35 woodengr. plates and two folding engr. plans; creases to plans, very occasional small spotting, light offsetting of the frontispiece onto the title page, overall however fresh internally. Contemporary sheep over brown cloth boards, decorative ornament blindstamped to covers, lettering and decorative ornament stamped in blind to spine; spine rubbed and chipped, upper hinge starting, corners bumped. An extensive illustrated description of the Peter the Great’s favoured residence compiled by the Russian general, historian and publisher Geyrot (1817—82). The work comprises two parts: the first one provides a historical overview of the Peterhof area from 1500 until 1868 when the imperial residence received the bride of the future Alexander III, Princess Dagmar of Denmark; the second, larger part serves as a guide to the Peterhof complex. The work is based on the extensice research of archives, memoirs and accounts of the Russian and foreign travellers and is nicely illustrated with views of the residence after drawings by Karl Osipovich Brozh and two plans - of Pererhof and of the environs of Saint Petersburg. A quality production issued from the presses of the celebrated Academy of Sciences of Saint Petersburg, with the plates and plans issued from various other high-quality presses of the capital. Interestingly, the frontispiece portrait of Peter the Great was engraved in London (but printed in St. Petersburg) and is captioned in English. Provenance: Library of the Moscow Theological Academy] (stamps to half-title, title, some pages and verso of all plates); Avenir Nizoff (a pianist in the second half of the 20th century, living in Edmonton, Canada, who gathered a large library of Russian works of all kinds; «Printed in Soviet Union» ink stamp to half-title) All lots marked with the symbol “plus (+)” are under temporary importation are subject to import tax (5.5%) (EU).
Do not miss the latest news on our initiatives and our auctions
|