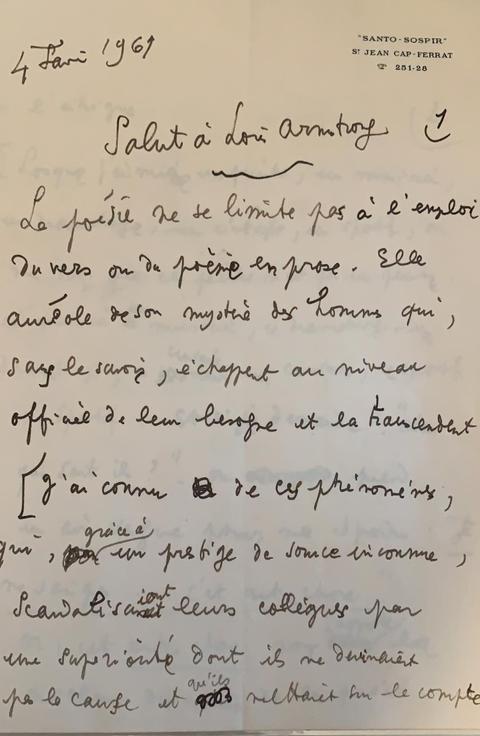 Manuscript letter signed “Jean Cocteau”. 15 photographs from the Erpé Nice studio. 1) Salute to Louis Armstrong. 4 January 1961. 4 pages in-4, in black ink on 4 headed sheets “Santo-Sospir, St Jean Cap-Ferrat”. Tribute to the great jazz musician Louis ARMSTRONG. “Poetry is not limited to the use of verse or prose poems. It haloes from its mystery men who, without knowing it, escape the offi cial level of their work and transcend it. ...] When I admire a painter, a musician, a playwright, a fi lmmaker, a sportsman, I am told that this painter is not a painter, this musician is a musician [...] this “something else” gives us the best defi nition of poetry. This “something else” allows me to place a Georges Carpentier, an Al Brown, a Cochet, a Charles Pélissier, among the poets and I give them the title of “poets of sport”. ...] Armstrong remains the only poet whose “breath gives form to the trumpets” as Gongora said, and no other poet moves souls more religiously than the bitter and tender velvet of his voice, than the cry of his trumpet, like that of the seventh angel of the Apocalypse”. And he adds: “Louis Armstrong knew how to marry musical science with the primitive nobility of the great race of blacks. The result is inimitable”. This speech was given during a concert by Louis Armstrong at the Casino de Nice on January 31, 1961, where Cocteau presented him with the Trophée du Disque. 2) Another text typed by Cocteau “Hommage à Louis Armstrong”, written for the Académie du disque français. 15 December 1955, 1 p. in-4, heading “Académie du Disque Français”. 3) 15 photographs of the Erpé studio in Nice during the Nice Jazz Festival. Period black and white prints. 22,8x16,8cm. Mounted on album pages. - Cocteau with Louis Armstrong, giving him the Discobole, - Armstrong signing a portrait on stage, just outside his hotel, - The pianist Samson François, - Festival organizers in front of a poster by Armstrong, etc. 4) Small fi le of press clippings about the Festival with the programme of the Festival And a photograph of a lunch at Michel de Bry’s. Jean Cocteau, born on 5 July 1889 in Maisons-Laffi tte and died on 11 October 1963 in his home in Milly-la-Forêt, was a French poet, graphic designer, dramatist, playwright and fi lmmaker. Published his fi rst collection of poems at the age of 20. He was elected to the Académie Française in 1955. Louis Armstrong, born August 4, 1901 in New Orleans, Louisiana and died July 6, 1971 in New York City, also known by the nicknames “Dippermouth”, “Satchmo” (for satchel-mouth) and “Pops”, is an African-American jazz musician. Armstrong’s infl uence on the development of jazz is unparalleled.
Do not miss the latest news on our initiatives and our auctions
|