THE GRAND-DUCAL AND IMPERIAL HUNT IN RUSSIA, 10TH TO 16TH CENTURIES. 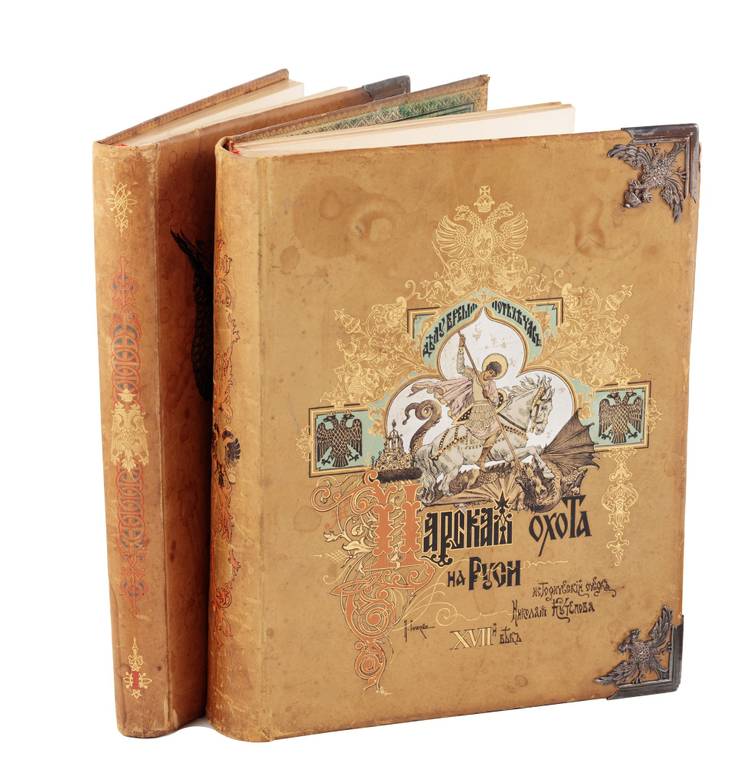 Prev Lot | Auction | Lot Next
6 000 8 000
St. Petersburg: Expedition for the Preparation of Government Papers, 1896. Large 4to (37 cm.), 8 coloured and plain plates (some tipped-in), numerous coloured and plain illustrations in text, some heightened with gold or silver, some full-page, mostly by Samokish and Vasnetsov, bound in original pictorial beige cloth gilt, original silver corner-piece, at spine gilt, gilt edges, pictorial endleaves (binding soiled, one corner-piece lost, other damaged). Book-plate of the general Dimitri Oznobishin. This is the rst of a four-volume set which aimed to "...describe the imperial hunts from the tenth through nineteenth centuries. The illustrations were commissioned from A. Benois, Lancere, Lebedev, L. Pasternak, Repin, Riabushkin, Rubo, Samokish, Serov, Stepanov, Surikov and Vasnetsov among others. This work was the rst description of hunting published in Russia" (Fekula). Berezin II 146. Burtsev 156. Fekula 2575. Thiébaud 217 ('a luxurious publication of remarkable typographic execution').
Do not miss the latest news on our initiatives and our auctions
|